The best collection of preserved and working trams in Britain.

Crich Tramway Village is a fascinating museum catering for all ages. For those of us who remember trams, there is the thrill of seeing them in action again. For the youngsters there is the excitement of climbing the narrow spiral staircase to the top deck and turning the seats round for the return journey. Trams are definitely different. 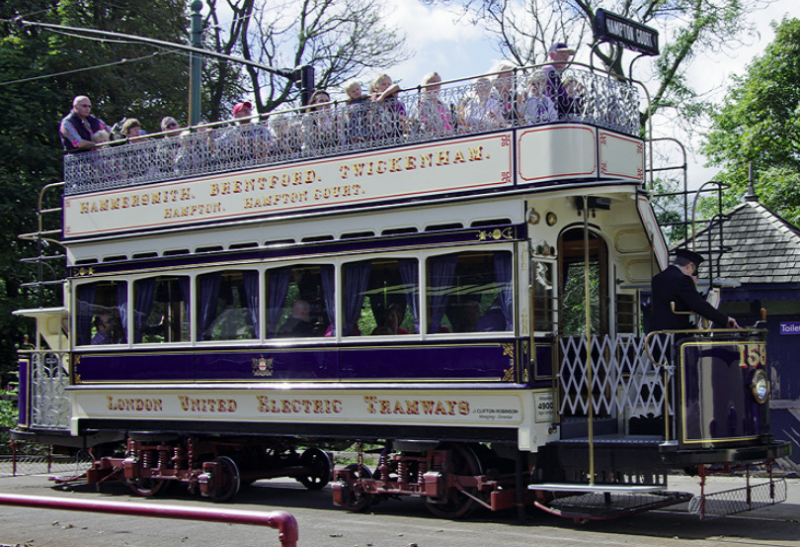 The village is run by a team of dedicated staff and volunteer enthusiasts, who are only too pleased to talk about the trams and museum as well as answering any questions. Check out on talks offered during the day. The one in the Great Exhibition Hall covering the history of trams which was fascinating. Link this in with viewing the workshops with trams being restored, an excellent collection of working trams in the tram shed, some beautifully restored trams in the Great Exhibition, and unlimited tram rides. You can’t go wrong.

The Tramway Village is set in the midst of the Derbyshire Dales, near the small village of Crich. It is a lovely setting with views across the Derwent Valley. The land was bought from the disused Cliff Quarry next to the site and some of the old stone quarry buildings have been kept in the village site, like the Eagle Press. 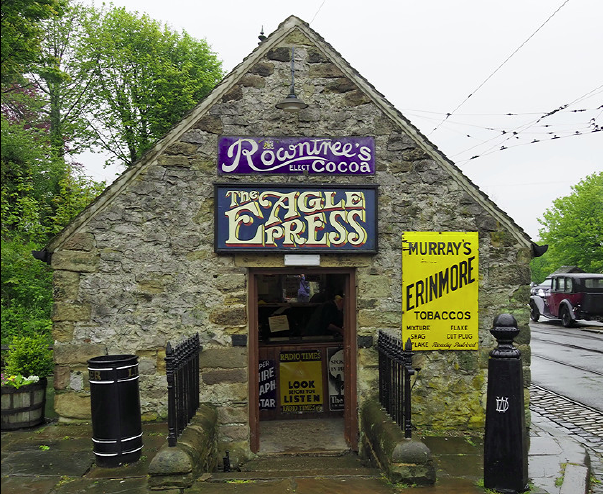 Other buildings have been rescued from towns and cities around England. The Derby Assembly Room Facade faces the main road and is the first building visitors to the Tramway village see. Next to it is the Yorkshire Penny Bank. The Red Lion Pub complete with a lion on top and with its splendid tile frontage came from Stoke. Walking down the cobbled main street, it’s like taking a step back in time. Each side of the street is flanked by period buildings and street furniture from all over the country. There are old street lamps, Victorian post box, Gents pissoir, cattle trough and drinking fountain, Metropolitan Police Box (Tardis for fans of Dr Who) as well as the only button A & B phone in Britain still working on the British Telecom system. Don’t miss the School sign still with its beacon symbol. Horses are not forgotten with a horse trough, once a common site. 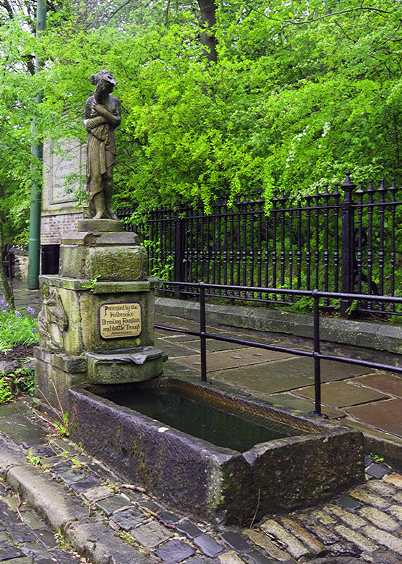 There is a ten minute tram service running along a mile of track, usually with three trams in service. These vary from day to day. Be warned these are not the easiest of vehicles to climb onto as they have very high steps and steep stairs to the top deck. They are unable to take pushchairs or wheelchairs and a buggy park is provided. There is a buggy park provided. There is a special access tram which has been adapted to lift and carry visitors in wheelchairs which runs at 11.30 and 2.30 on request. Ask the admission staff when arriving at the museum or talk to the tram inspector at the town terminus.

The trip takes you through the village, past the closed Cliff Quarry and out onto the open hillside with views of the Derwent valley. With admission you are given a genuine old 1d coin (children an old ha’penny) to hand to the conductor in exchange for an all day ticket which gives unlimited rides for the rest of the day. The conductor has an old fashioned bank of tickets as well as a punch. The first part of this through the village ran along the line of the mineral railway from the quarry, which was built by George Stephenson. The upper part of the line was built specially for the trams.

There are several stops to allow trams to pass (look out for the use of the token). Victoria Park with its band stand gives access to a picnic site and childrens play area. Wakebridge, the mid stop, has a selection of artefacts from local lead mines including a circular crusher and a short adit. Just below the track is the substation with an exhibit explaining how electric current is used to feed the trams.

This is also the start of the woodland walk, a lovely trail through the trees back to the village. Look out for the different sculptures along the way including the giant ant.

The end of the line, Glory Mine, allows visitors to get off and walk up the hill to the Sherwood Foresters Memorial Tower, erected in 1923 to commemorate those of the regiment who had died in battle. For those who stay on the tram there is chance to see the conductor pulling the trolley round.

As well as tram rides, there is plenty of other things to do. The Great Exhibition Hall (with Children’s indoor play area attached) covers the history of trams beginning with horse trams from the 1860s through to some of the last working trams in 1960. There is a lovely single decker Chesterfield and Brampton horse tram. The open top, double decker tram from Cardiff must have been a novelty as there is a sign painted on the tram reminding passengers to remain seated under bridges….

There is a Beyer Peacock steam tram from 1885 with covered wheels. This was shipped to Sidney, Australia to demonstrate the capabilities of tramways. It proved expensive to operate, so was returned to the manufacturers where it ended up as a works shunter.

The exhibit covers the development from outside staircases and drivers standing outside to the enclosed separate driver’s cab with a seat. Early seats for passengers were wood, but in the later trams were padded moquette. All the trams are in beautiful condition. Compare them with the small unrestored Leamington and Warwick tram. A wall display shows how this finish is achieved with three primers, three undercoats, three top coats and a final layer of varnish. Depending on the tram they can cost between £300,000 to £500,000 to restore to working order.

The Tram Depot contains the working trams and has examples from Glasgow, Sheffield (including Sheffield’s last tram) Southampton, Leeds, London. Don’t miss the transverser, a clever way of getting trams in and out of the depot. Next to it is the workshop. There is no admittance to this, but there is an upstairs viewing gallery accessed from the George Stephenson Discovery and Learning Centre. This looks at conditions of life in the rapidly growing towns and the development of trams. Don’t miss the information about how much food a single horse needed as well as the volume of urine and manure it produced….

The Derby Assembly Rooms has maps of all the tramway systems operating in Britain. Some like Lincoln were just a single short route. It also has information about the development of the museum and its volunteers.

There is a small shop selling a range of models, books and small items aimed at the kids. For the kids (or those of us who are still kids at heart) there is Barnett’s Sweetshop selling a wide range of confectionery (including sugar free) from big glass jars. The Ice Cream Parlour sells a range of locally produced ice creams.

The Red Lion Pub serves sandwiches and soups at lunchtimes. It is also gaining an increasing reputation for its real ales. Alternatively there is Rita’s Tea Rooms which serves bacon or sausage butties for early arrivals, a selection of hot food from 12-2.30 as well as cakes throughout the day.

Visitors are allowed to bring in their own food and there are picnic areas and plenty of benches around the village to sit and eat.

Allow plenty of time for a visit, especially if you are planning on several tram rides. and wanting to join the guided tours. Also try and choose a dry day!

This makes an excellent day out. There were all ages from babes in arms to geriatrics. There were family groups as well as grandparents and grandchildren. If in the area, it is definitely worth visiting. Keep hold of your ticket as this gives free admission for 12 months. They also offer tram driving experiences…

SOME BACKGROUND INFORMATION ABOUT TRAMS

Trams were first introduced from the united States in 1840 and quickly proved a great improvement on the horse driven carriages. Rails gave a much smoother ride on the rough road surfaces of the day.

Early vehicles were horse drawn and the museum has exhibits of trams from Chesterfield & Brampton, Sheffield Corporation (which is still used on special horse tram days) as well as Cardiff.

The introduction of electric traction led to rapid development of tramway systems in towns and villages throughout the country. Everywhere aspired to a tram system as the tram was the first vehicle to provide cheap urban transport for the masses. By the 1920s there were over 14,000 tramcars in operation and each company had its own livery. A few other companies used a stud contact system. The current was fed to a conductor beneath the road. Studs were set in the road surface at intervals between the rails. As the tram passes over them, a skate collector beneath the tram depressed the stud as it passed over, so picking up the current. These proved unpopular as the studs had a tendency to remain live after the tram had passed. They were also liable to burst into flames. Examples of the studs can be seen between the rails from the workshop into the yard.

By the Second World War, trams were regarded as old fashioned and uncomfortable. They were disappearing to be replaced by buses and trolley buses. The last trams ran in the early 1960s.