The Brontes and the Railway Children.

A hilltop village set above the steep Worth Valley on the edge of the windswept Pennine Moors, you can almost feel the spirit of the Bronte sisters here. The cobbled streets of the old town climb up to the Church and Parsonage at the top of the hill. Below, spread out along the valley bottom, are the mills that provided employment and prosperity in the C19th, served by the Keighley and Worth Valley railway.

Haworth is very much on the tourist trail and is visited by thousands of people for its connections with the Bronte sisters. Younger visitors are probably more interested in the Railway Children connections as many of the scenes of the iconic 1970 film were shot in the area. The Keighley and Worth Valley Railway also features prominently in the film. There is even a Railway Children Walk to follow.

Most people arriving at Haworth head straight up the very steep Main Street for the church and Parsonage. This is lined with old stone built houses with stone slab roofs. Many of the windows are later additions, replacing earlier and smaller windows. Some still retain their weaver's heritage, with the big top floor windows giving light for the hand looms.

Tourism is big business and there are many cafes and tourist shops up Main Street. Tourist Information is in the small square at the top of the street, which still has one of the remaining iconic red telephone boxes. 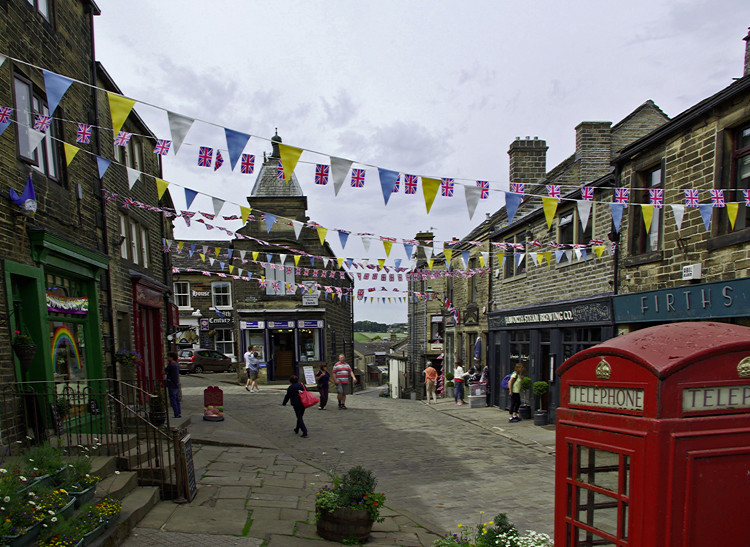 The Black Bull is the pub where Branwell drank. Across the road is the Apothecary's shop where he bought his opium. This has now been restored to its former glory as The Cabinet of Curiosities with antique fittings and selling a range of lotions, balms and soaps all based on traditional recipes 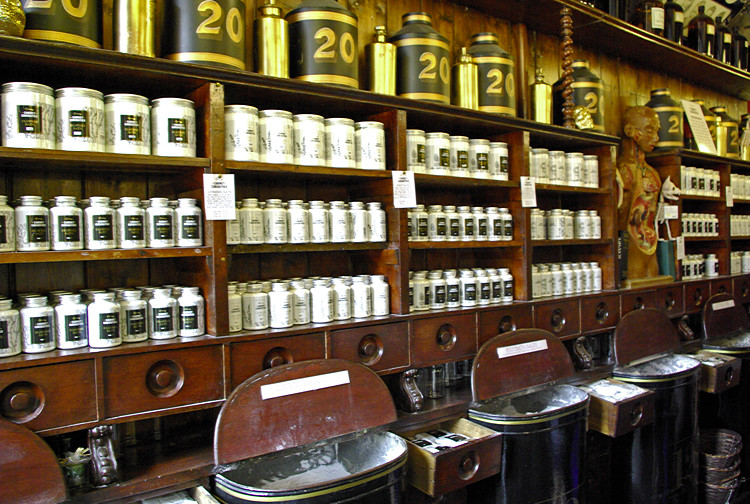 St Michael and All Angels Church is reached up steps off Main Street and is surrounded by a large and now disused graveyard full of gently collapsing graves. It is estimated over 40,000 people were buried here. This overcrowding along with poor drainage affected the sanitation in the village. Nearly half the children died before the age of six and the average age was only 24. The graveyard was closed in 1883 and a new cemetery built outside the village.

The church dates from the late C19th as the church where Patrick Bronte preached and Emily, Anne and Charlotte attended was proclaimed as unsafe and unsanitary after the death of Patrick. Even though there was a national outcry it was demolished. Only the base of the tower survives along with the communion table and chandelier in the Bronte Chapel inside the present church. A bronze memorial in the floor marks the site of the Bronte Family vault where all the family apart from Anne are buried. 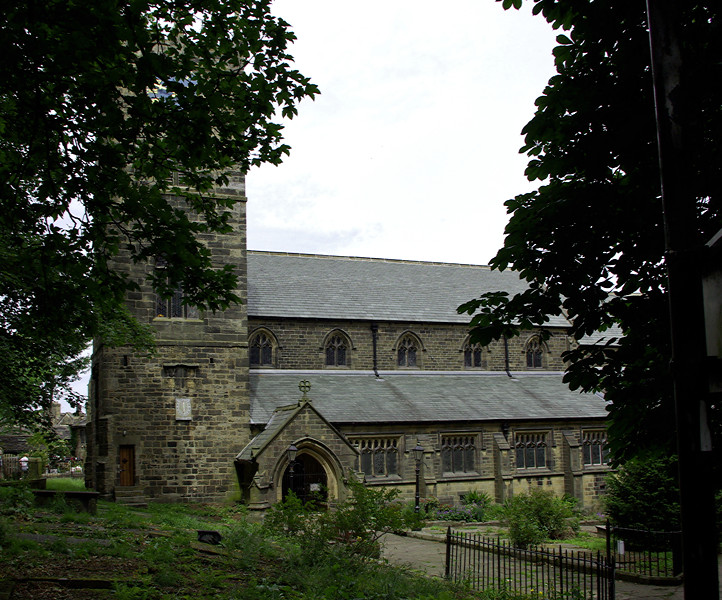 The Parsonage stands above the churchyard and has been preserved as the Bronte Parsonage Museum.

It is a lovely Georgian building and the rooms are furnished as they would have been when the Brontes lived here, with their furniture, clothes and personal possessions. Between the Parsonage and the Church is the old school room. This was built by Patrick who was a great believer in the importance of education. All his children taught in the school. This now hosts craft fairs, exhibitions and meetings.

From the Parsonage, a footpath leads out across the moors. 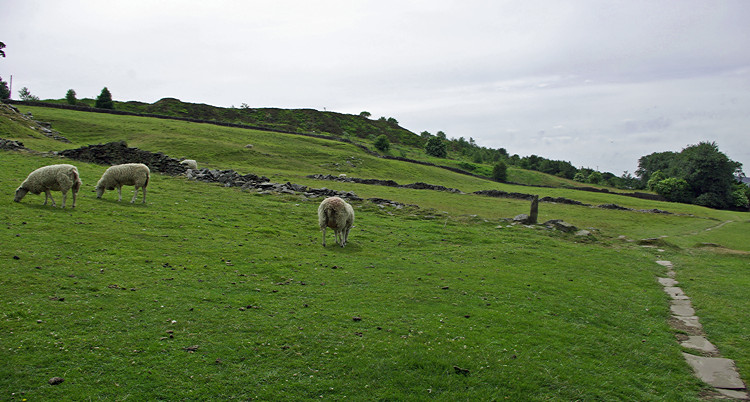 This was a favourite walk of the Bronte sisters and lead to a small waterfall and continues to the ruins of Top Withens Farm, which is thought to have been the inspiration for Emily Bronte’s Wuthering Heights.

The settlement along the bottom of the valley is newer than that at the top of the town and has a more workaday feel to it. Shops are used by locals and there are few concessions to tourists here. Platform 4 Sandwich Station provides a good cheap take away service welcomed by railway staff as well as visitors.

The Keighley and Worth Valley Railway is a five mile long branch line that runs from Oxenhope to Keighley. It was operated by the Midland Railway Company and served 15 mills along the valley bottom, as well as Haworth and Ingrow. The line closed in 1962 but was reopened again a few years later by enthusiastic volunteers. The stations are still painted in Midland Railway colours and it retains the feel of an inter war branch line, with an interesting selection of steam locos and diesel railbuses. There is a good view of the depot and assembled locos from the railway bridge on Bridgehouse Lane.

Despite the pressure of tourists, Haworth retains its character and atmosphere, particularly on a late December afternoon when the dusk is falling. It really does feel like stepping back 150 years.
Last edited: Jan 3, 2022
Click to expand...

St Michael and All Saints’ Church

Standing at the top of the village, the tower of St Michael and All Saints’ still dominates the village, which is a site of pilgrimage for Bronte fans. Patrick Bronte was parson here for many years. Anne, Emily and Charlotte grew up in the Parsonage and many of their novels were written here.

The family (apart from Anne, who is buried in Scarborough) were buried in the church, but the present church is not the church where Patrick preached or where the Bronte sisters sat and listened to him.

After the death of Patrick, the church was proclaimed unsafe and unsanitary. It was demolished, even though there was a national outcry over this. Only the the base of the C15th tower survives and the outline of the original church roof can still be seen on the east side of the tower. 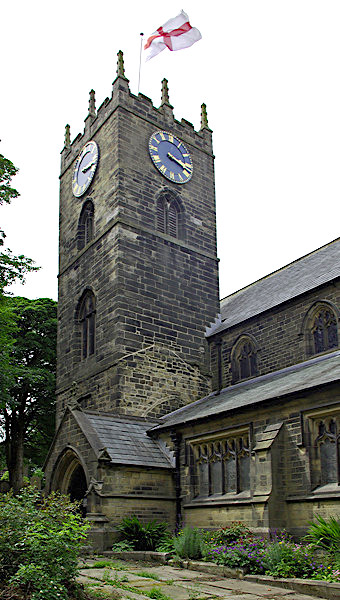 The new church was completed between 1878-1881 at a cost of £7000. It is a typical Victorian Gothic building with square tower at the west end, nave and chancel with lower side aisles. 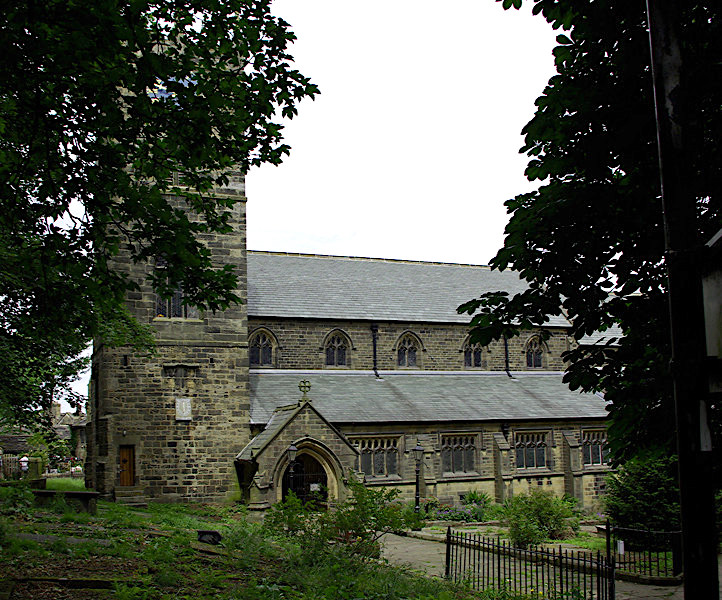 The Parsonage still overlooks the large and packed graveyard surrounding the church. It is estimated over 40,000 people were buried here. This overcrowding, along with poor drainage, affected the sanitation in the village. Nearly half the children died before the age of six and the average age of the population was was only 24. The graveyard was closed in 1883 and a new cemetery built outside the village.

Entry into the church is through the north door into the large nave with its massive hammer beam roof. An arcade of octagonal pillars with pointed arches separate the nave and lower side aisles. These contain C19th stained glass. The clerestory windows contain pastel shades of glass. The remains of painting can just be made out on the roof beams and there is a large painting above the chancel arch. The paint has darkened so much that it is impossible to make out any detail. There are the remains of even darker paintings in the chancel. On the vestry wall at the back of the church is the remains of a wall painting with Jesus riding into Jerusalem on a donkey on Palm Sunday. 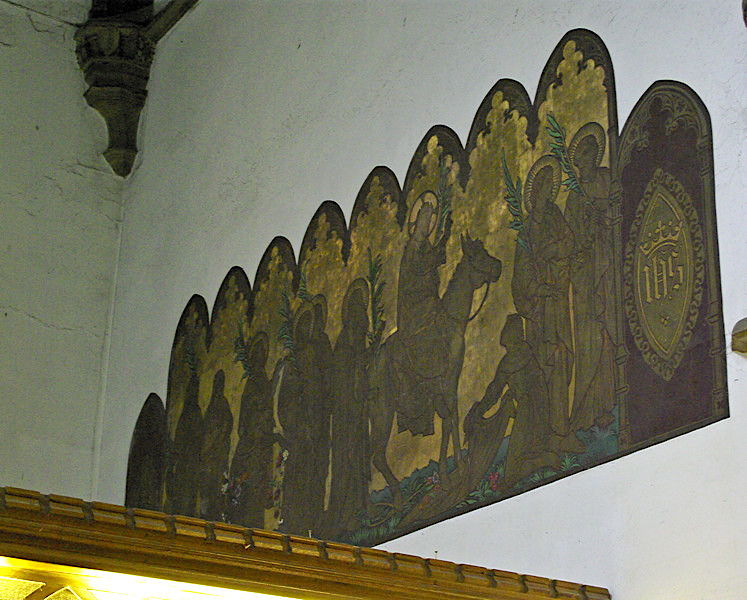 The font and pulpit are made of carved alabaster. The carving on the pulpit depicts Jesus with the two disciples on the road to Emmaus. The altar rail and reredos of the Last Supper on the east wall are also alabaster. On the floor between the chancel and Bronte Chapel is a brass memorial to Charlotte and Emily Bronte, placed there is 1882. This marks the site of the Bronte crypt. The Bronte Chapel to the south of the chancel was dedicated in 1964 and contains the altar and chandelier from the original church. The memorial on the south wall was made by Patrick Bronte and records the deaths of his wife and six children. Patrick outlived them all and his name was added in the space left at the bottom. On the opposite wall is a small memorial to Elizabeth Branwell, his sister in law, who looked after the children after the death of his wife. In front of the chapel is a small display of Bronte related memorabilia including a copy of the register entry recording Charlotte’s marriage to Arthur Bell Nichols. Near this is what is described as either the American Window or the Bronte window. This was given by an American admirer, Thomas Hockly, in memory of Charlotte. At the back of the north aisle is the memorial window dedicated to those that died in the First World War, with the images of St George and St Galahad. Even though this isn’t the ‘real’ Bronte Church it is never the less and attractive Victorian Church.