Hebden Bridge is a thriving small market town in the Upper Calder Valley. This is an area of steep wooded river valleys with terraced houses climbing up the hillsides. The roads zig zag up the hillsides and are buttressed to stop them sliding downwards. The main development of splendid C18th and C19th buildings is concentrated around Hebden Water and the old packhorse bridge. In medieval times, the valley bottoms were too swampy, so the original settlement of Heptonstall was built on the top of the hill. It became a thriving medieval township with a mixed economy based on agriculture and domestic manufacture of cloth. A packhorse trail dropped down the hillside to cross the Hebden Water at a wooden packhorse bridge.

A water mill was constructed near the bridge in 1314 and was originally used for drying and grinding oats for farmers in Heptonstall. It later became a textile mill. Increasing traffic meant the wooden packhorse bridge was replaced by a stone bridge in 1510. This had refuges to avoid pedestrians being tipped over the parapet by bulky paniers on the pack horses.

Improved drainage in the C17th allowed the valley bottoms to be settled. Kings Farm was built next to the mill in 1657 and patronage from passing trade meant this soon began to serve as an Inn. The building is still there and is now the White Lion Hotel. Other hostelries soon followed. 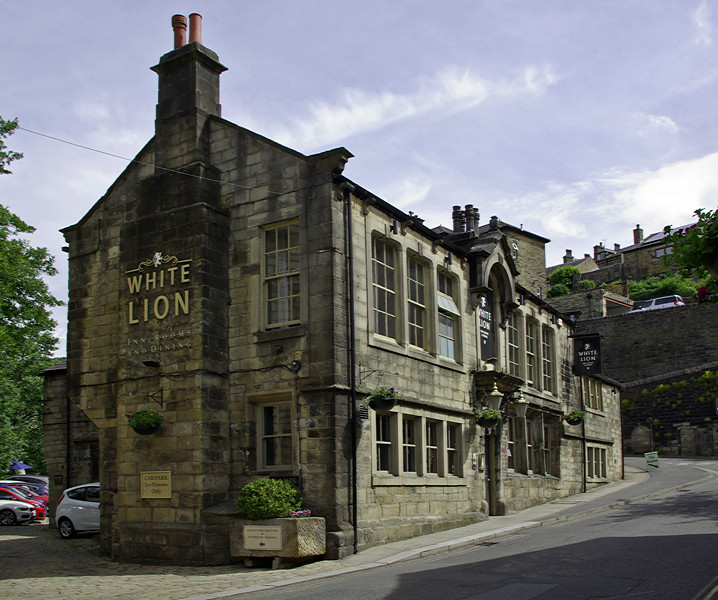 With fast flowing streams from the steep hills and access to the major wool markets, Hebden Bridge was ideal for water powered weaving mills. The town grew rapidly as more mills were built. Large and impressive civic buildings and shops soon followed. The Rochdale Canal which links Sowerby Bridge with Manchester, was built in 1795 and canal traffic rapidly replaced packhorses. One canal boat could transport as much cargo as 400 packhorse, and brought coal, corn, stone and wool to the town and carried away finished goods. The railway from Leeds to Manchester and Burnley arrived in 1840.

Hebden Bridge became an important centre for the production of fustion cloth and ready made clothing. Manufacture peaked by 1890 and Hebden Bridge was affectionately referred to as the ‘trouser town’. In the C20th there was a slow decline in manufacturing and by the 1950s and 60s the local textile industry had virtually been wiped out when 33 factories closed.

The town became quite depressed with unemployment and depopulation. The canal was no longer needed and rapidly became overgrown.

In 1965 there was a community led plan to improve the image of the town. Trees were planted, buildings cleaned and rubbish removed from the river. News spread with a media campaign and new residents including artists, writers, photographers, musicians, and new age practitioners, were attracted by low property prices. The town still hosts a yearly arts festival.

As the economy revived, the town became, and still is, a popular dormitory town with the wealthier more upwardly mobile with its good communication links to neighbouring towns and cities and also easy access to some splendid countryside.

Tourism has boomed and is now a major source of income. The multinational chain stores have yet to reach the town centre and it is mainly small high quality independently run stores providing a unique retail experience. It boasts excellent butchers and bakers as well as many shops offering unusual gifts and crafts.

The Visitor Centre has a free town guide with a map. It also has an illustrated town centre trail booklet which I used to explore. The trail is about three quarters of a mile and can easily be completed in 45-60 minutes.

The trail begins on Bridge Gate, a couple of minutes walk from the Visitor Centre. This is now pedestrianised and is an attractive street lined with stone houses with stone slab roofs. Many are now shops. Off Bridge Gate is the old packhorse bridge. In the late 1970s several of the buildings on the approach to the bridge were demolished and the area has been landscaped to form the Wavy Steps. This is popular place to feed the ducks. 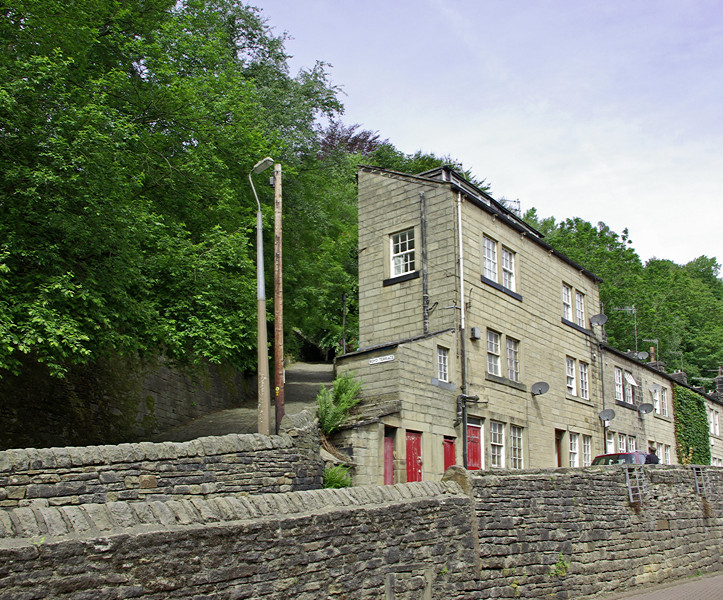 Although the trail tells you to retrace your steps to Bridge Gate, it is worth ignoring this advice and crossing the bridge and turn right and walking a short distance past Royd Villas to find Bonsall’s Ironmonger’s shop. This is a real old fashioned ironmongers with goods hanging from the ceiling and spilling out onto the pavement. Continue along Valley Road to cross back over St George’s Bridge, which was built in 1892 when a larger bridge than the Packhorse bridge was needed. This takes you past the Old Town Hall, a splendid stone building dating from 1897. This is one of the few community owned Town Halls in Britain. At the start of the C21st this was hardly used and falling into disrepair. It has since undergone a £3.7million pound transformation and is now an important community hub with cafe, exhibition space and events venue Across the bridge is the site of the first mill. The present building dates from the C18th with steam power replacing water. original mill. The mill closed in 1965. The building has been restored and is now the Innovation Shop and Cafe Bar. Small gift shops sell a range of ethically sourced goods. The waterwheel has been restored and still turns and can be seen in the bar area. The cafe has also installed a new Archimedes Screw turbine to provide power for the cafe. Upstairs by the toilets is the original clocking in time clock.

Beyond the old mill is the White Lion Hotel, the oldest hotel in Hebden Bridge. Across the road from it is the remains of an old barn with attached farmhouse. Above it on the hillside is Stubbings Infants School which was built in 1878 and was the first Board School in Hebden Bridge, and is still a school. Behind this is St George’s Square which is more of a triangle than a square. It is surrounded by some of the oldest buildings in Hebden Bridge. The sundial in the square represents the knife used for cutting the grooves in fustian cloth.

The market is held in Lees Yard at the back of St George’s Square.

The main town centre is focused round the streets to the south of St George’s square. These are lined with splendid late C19th buildings. The base of many are now shops. The trail takes you down Crown Street but it is also worth walking along Hope Street and Albert Street as well.

Any of them will bring you out onto New Road with the impressive classical building of Hope Baptist Chapel. Many of the weaving families were staunch baptists and numbers of worshippers had outgrown the Ebenezer Chapel on Market Street. Continuing past the Baptist Chapel and Bridge Gate, the trail crosses Hebden Water onto Market Street. This was once the grand shopping area of the town and still retains many splendid shop fronts. Set back from the road and surrounded by a garden which was originally the cemetery, is the old Ebenezer Chapel dating from 1777. This closed when the Hope Baptist Chapel was built, although it continued as a Sunday School for a few more years. This is now the Arts Centre and Heart Gallery. Further along Market Street are some splendid Victorian houses. The trail now returns back along Market Street and down Holme Street to the Rochdale Canal. Alternatively this can be reached through the Memorial Gardens across the road from the Hope Baptist Church. These were built by public subscription in 1938 as a memorial to the dead of the First World War. They are an attractive area of grass, trees and flowers with seats. They gives access to the canal tow path, a popular local walk. The Marina is actually the old dock basin with its loading bay for barges. This is now an attractive paved area with seating. Beyond the canal is Calder Holmes Park, with its outdoor gym, children’s play area and cafe. Beyond is the River Calder and the railway line. The station features in Simon Jenkin’s book Britain’s 100 Best Stations, possibly as local ‘friends’ care for the waiting rooms, filling them with books, magazines and music.

This sums up Hebden Bridge. It really is a place that is loved and cared for by its community. There is no litter or graffiti. It is relaxed and happy and people have time to stand and talk. It is an interesting place to visit and possibly the place to go for that unusual gift for hard to buy for friends...
Last edited: Jan 3, 2022
Click to expand...

Hi Eleanor
I had already marked Hebden Bridge as a must see on our coming trip in December and January. Despite it being the depths of winter, I thought it could be quite special. We drove through the eastern parts of Yorkshire last August, so saw amazing panoramas of heather. This time we thought maybe snow. did you stay in Hebden Bridge or nearby? Anywhere to recomend?
Yanu
Gavin

Thank you Gavin. I live about 90 minutes drive away, so just visited for the day. I've not stayed anywhere in the area, so can't help you.

December and January will be cold but there is no guarantee of snow - rain yes, but not necessarily snow. It does look wonderful in snow but plays havoc with travel plans, with roads blocked. the council tried hard to keep main roads open but not smaller rural roads. These often depend on the good will of farmers clearing them with their tractors.
Deep steep sided valleys make it even more difficult.

It's an attractive area and Haworth (of Bronte fame) is not far away.
Last edited by a moderator: Feb 17, 2021
http://wasleys.org.uk/eleanor/index.html
You must log in or register to reply here.
Share:
Email Share Link