A splendid Elizabethan Mansion built around a C14th pele tower.

Levens Hall is a splendid Elizabethan house in the valley of the River Kent and surrounded by rich farmland.

The original building dates from C13th, when the Redman family built a pele tower here as a defence against the Scots.

The estate was sold to Alan Bellingham in 1562. The pele tower was in poor condition and he was responsible for rebuilding and extending the building. Only the base of the pele tower survived. The building was turned into a comfortable family home, with panelling and plaster ceilings. He employed some of the best Italian plasterers. The family were fiercely loyal to Elizabeth I and her coat of arms can be seen throughout the house.

The house and estates passed to Colonel James Grahme in 1688. There is a story that the last Bellingham owner not only gambled his fortune away, but also risked his house and estate on a single turn of the cards, and lost. The rainwater heads on the exterior of the house are decorated with the symbol of a single heart, said to represent the ace of hearts that won the Levens estate for Col. Grahme.

Grahme was responsible for asking Guillaume Beaumont to redesign the park and gardens, turning the medieval deer park into the latest fashion garden with clipped evergreens and hedged enclosures. The gardens still maintain their original layout and are one of the few Elizabethan designs to survive. The topiary garden was planted in 1694 and many of the original trees still survive. It is the oldest topiary garden in the world.

The estate remained in the Grahme family, passing through marriage to the Howard Family and then to the Bagot family, who own it now.

Mary Wellesley, the favourite niece of the Duke of Wellington married a Bagot and there is a lot of Wellington memorabilia in the house which was left to her in Wellington’s will.

The main entrance is flanked by a stone pillars topped with pineapples.

The drive continues across the front of the house to the service courtyard to the west of the hall. This is now the Levens Kitchen

A short flight of stone steps leads up to the main entrance and the four storied pele tower is to the right. 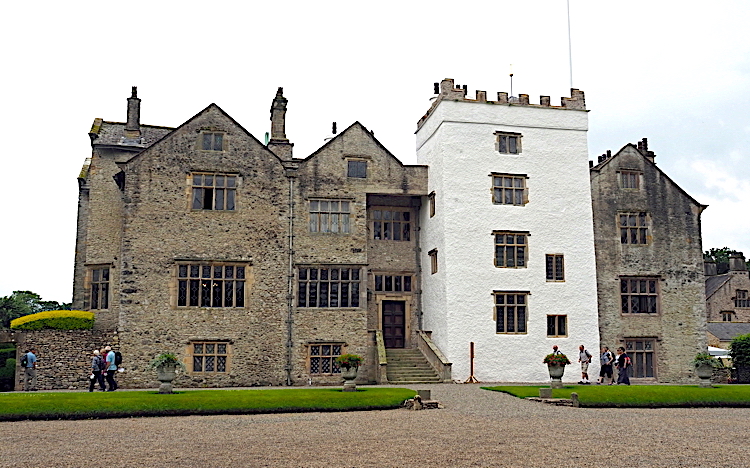 Visits were by guided tour when I visited in July 2012. Photography is not allowed in the house.

The doorway leads directly into the Great Hall with wood panelling, brass sconces and a lovely plaster ceiling. The badges above the panelling are of the different members of the Bellingham family. Above the fireplace are the royal coat of arms of Elizabeth I.The armour hanging on the walls is parliamentary armour from the Civil War, which was found in the attics. The pair of pistols above the fireplace are a matched pair dating from 1601 and made for James Bellingham.

It is a homely room with sofas and a log burner. Logs are stored in one of the old brewing barrels. Hanging on the wall near this is a saddle belonging to the Emperor Napoleon and was ‘acquired’ by the Duke of Wellington.

On the left hand wall is a Rubens copy of a portrait of Anne of Bohemia.

The tour continues into the Large Drawing Room, which was part of the rebuilt pele tower. The size of the windows reflect the wealth of the Bellingham family, which came from wool. There are stained glass armorial arms in the top of the windows. There is more panelling and a splendid carved overmantle with the arms of Elizabeth I. The central partner desk was made by Robert Gillow in the C19th, although the two chairs are mid C16th and have six legs, making them very stable.

On either side of the door leading into the small drawing room are two Chippendale gilded wood candelabra. Carved above the door is a small effigy of James Bellingham, the only image of him.

The Small Drawing Room behind was also part of the pele tower and overlooks the topiary garden. The elaborate carved overmantle depicts the five senses with two panels depicting the four elements (left) and the four seasons (right). There is a display cabinet with Dresden figures of Napoleon and his marshals and a pair of gloves belonging to Wellington. In another cabinet are the original deeds from 1170.

A splendid oak stair case leads to the bedrooms. One wall is covered with Moroccan leather. The other is panelled.

The bedrooms were repanelled and refurnished in the early C19th by Mary Howard.

The first bedroom is the Redman Room, with a four poster bed which is still used by visitors. This is C19th and made by Gillow using wood brought in as ballast in ships. The large embroidered panel on the wall was the work of Mary Andover, who was a very good needlewoman. She had embroidered seat covers and this was intended to be a settee but she died before it was finished.

In the Dressing Room next to the Redman Bedroom is a bed covered with a patchwork quilt made in 1708 from Indian cotton and twenty two stitches per inch. It is some of the oldest patchwork in England.

Next to this is a Display Room which contains the robes worn at the coronation of George IV. There are more Napoleon artefacts, including an individual Sevres tea service and the metal bee clasps from his cape worn at the Battle of Waterloo.

Off the display room is another small bedroom with a model of the sailing ship, Hotspur, carved for Captain John Percy. The patchwork quilt was made by the Levens quilters to celebrate the tercentenary of the gardens.

In the small dressing room off is a folding campaign bed belonging to Wellington and also a rocking horse and babies crib with baby clothes.

The tour continues back down the main staircase into the Great Hall and up three steps into the Library and Small Sitting Room. This used to be the buttery and a door led into the dining room. Food was brought up from the kitchens into this room and then taken into the dining room to be served. Mary Howard was so fed up of eating cold food she installed a dumb waiter directly from the kitchen to the to the dining room. She turned the buttery into a library and small sitting room. There are book shelves on one wall. The overmantle is made of fragments of Jacobean carving.

The door to the Dining Room is no longer used, and it is now entered up stairs from the Great Hall. This is almost an overpowering room with low plaster ceiling and Moroccan leather on three of the walls.

The leather came from Holland, but the decoration was a done by Moors in Cordoba. Calf skin was tanned and then covered with a thin layer of silver and two coats of varnish. The pattern was punched out on the rear side using wooden moulds. The leather was then turned over and hand painted, before being hung on the walls. This was beginning to degrade so Mary Howard had the leather removed and mounted on wooden panels that could be reattached to the walls and prevent further degradation. There is also a screen made from pieces of the leather.

The other wall is panelled and there is a simple wooden overmantle dated 1586. The long wooden dining table and chairs date from 1640. The master sat at the head of the table nearest the buttery and dogs waiting to be fed have gnawed great chunks out of the table leg near him.

There is a small barrel on wheels that could be filled with gin and then be pushed up and down the table .

The tour finishes back in the Great Hall

This is an excellent visit. The guide was interesting and entertaining and the house was full of hidden surprises. It is still a much loved family home.
http://wasleys.org.uk/eleanor/index.html

The gardens at Levens Hall were laid out by Guillaume Beaumont, who was gardener to James II, for Colonel James Grahme after he had acquired the estate in in 1688. He turned the medieval deer park into the latest fashion with clipped evergreens and hedged enclosures. The haha, separating the gardens from the parkland was first mentioned in 1695, and is one of earliest recorded examples in the country.

The gardens escaped the C18th makeovers of Capability Brown and his followers and still maintain their original layout.

They are one of the few Elizabethan designs to survive. The topiary garden was planted in 1694 and many of the original trees still survive. It is the oldest and largest topiary garden in the world. 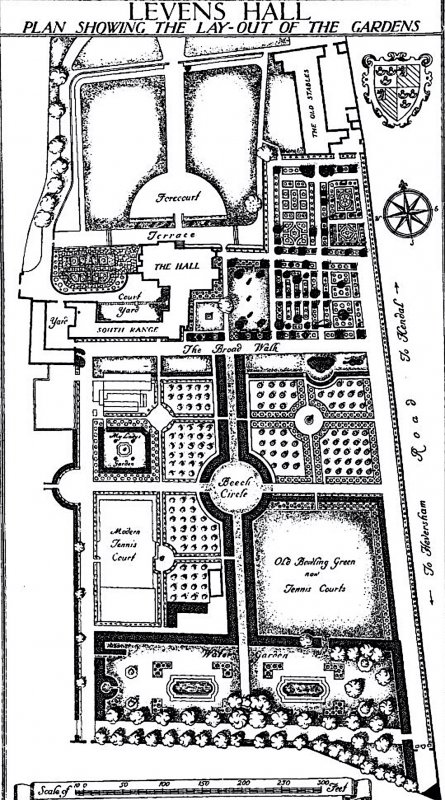 The gardens are entered through a wooden gateway next to the house. This leads into the Topiary Garden. Beyond, the garden is divided into four large rectangular areas by tall beech hedges and well made paths. The orchard is next to the topiary. Beside it is the vegetable garden and nuttery. Beyond thesae are the Bowling green and Fountain Garden. At the far end is the willow maze and a wilderness area.

The topiary garden is planted with yew and golden yew, as well as box hedges. There are over one hundred yews, and many are those planted by Beaumont. They have been cut into every possible shape imaginable. Growing up through some of the trees is a scarlet flowered climber, Scottish Flame Flower. 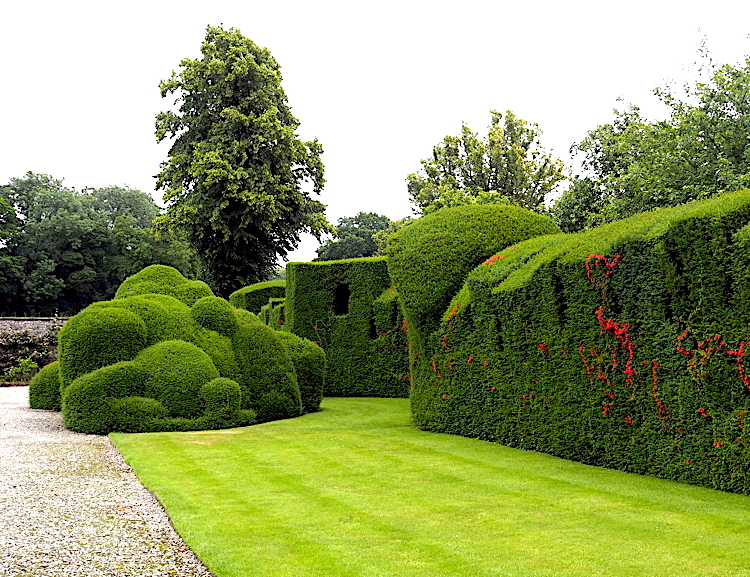 The trees are surrounded by flower beds contain old fashioned roses and flowering annuals. They are wonderful The orchard contains many old varieties of fruit trees. As well as apples and pear trees, there are medlars and quince and damsons. The edges of the four cross paths are planted with annuals attractive to bees. The bowling green was part of the original garden plan and is one of the oldest in the country. The original bowls are still on display in the house. The double border next to the orchard is planted with mainly pastel shades of flowers. Beyond the bowling green is the willow maze and a wilderness area along with children’s playground. The stone archway in the wall at the end of the garden is described as a ‘Folie’. 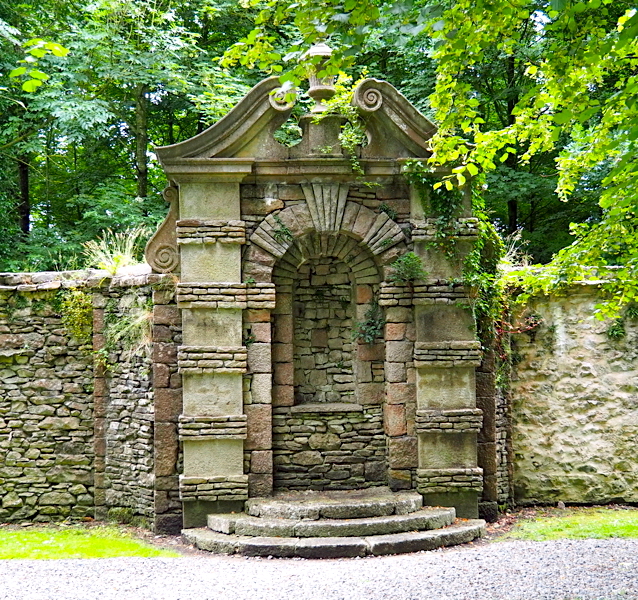 Opposite the bowling green is the fountain garden. At the centre is a small pond with water lilies and a small fountain. It is surrounded by beach hedges. Between the fountain garden and the vegetable garden is a herbaceous border. This runs from the central circle of the garden down to a stone urn overlooking the haha. The vegetable garden grows a wide range of vegetables for the house and restaurant. 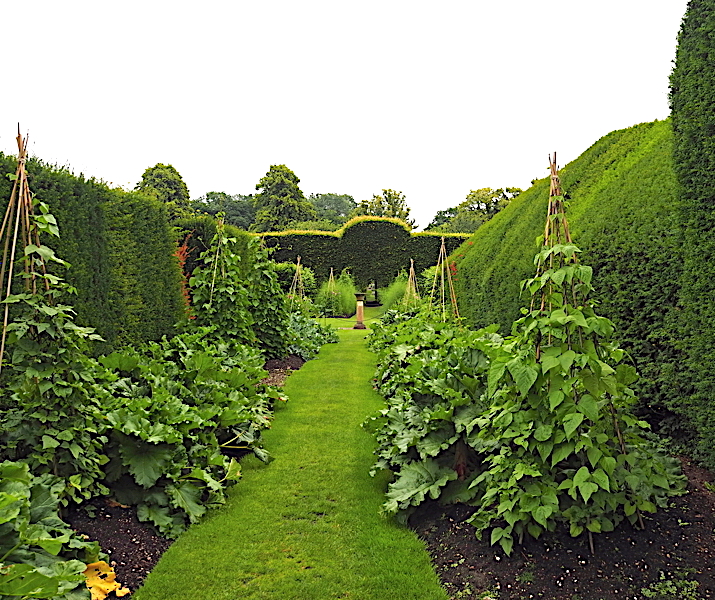 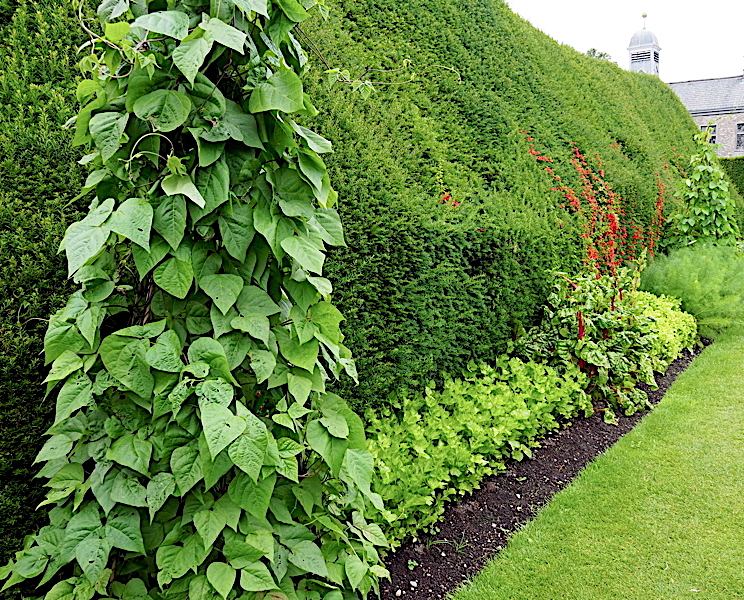 In one corner is the nuttery, growing different varieties of hazelnuts. Most of the nuts are eaten by red squirrels. This is one of the few areas of England where they can still be seen. These are really attractive gardens, and it is worth allowing plenty of time to enjoy them. Together with the Hall, they make a very worthwhile day out.