To many people, Hadrian's Wall IS Northumberland and the main reason most people visit. Hadrian’s Wall is a world heritage site and snakes across some of the most dramatic scenery in England. This map shows the major sites along the wall. There is a footpath along the length of the wall. Unless you specifically want to walk the whole length of the wall, limit yourself to the middle section between Housesteads and Walltown. This has the best remains, the best scenery and the best walking. It is the most rewarding part of the wall for visitors. Further east, the wall has been ‘robbed out’ as the stones were used for building. Many old buildings will have Roman wall stones. Corbridge Church has a saxon tower with a Roman arch inside.

Best access to the wall is along B6318, which rollercoasters across the landscape following the line of the wall. You get good views of the wall, the ditch to the north and the vallum to the south. It is referred to as the ‘Military Road’, but it is NOT Roman. It is one of a series of roads built by General Wade across Britain after the 1745 Jacobite Rebellion, when Bonnie Prince Charlie, the Young Pretender, was defeated by the Army of King George. These roads were designed to let Hanoverian troops move quickly across the country if there was another invasion.

The Romans built their supply road to the south of the wall. This is called the Stanegate and can still be seen in places. Stanegate gave access to a series of supply forts to the south of the wall at Corbridge and Vindolanda. Both of these are worth visiting.

Corbridge Roman Town is one of the less visited Roman sites with large, well preserved granaries. Corbridge itself is a charming village and, if you have time, it owes a visit. 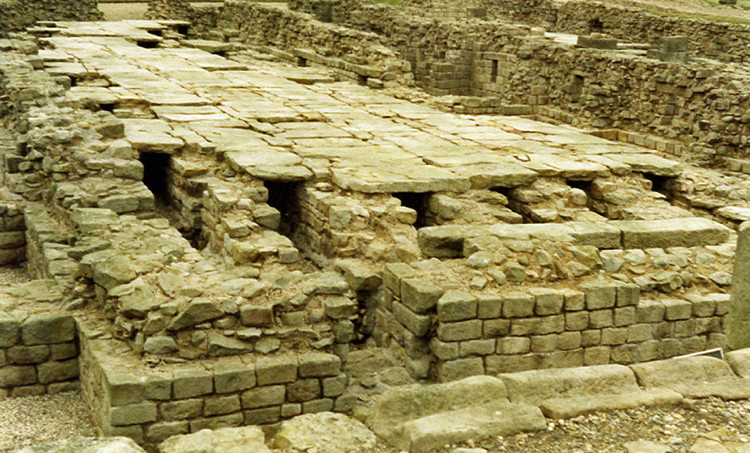 A few miles away is Vindolanda where a large civilian settlement around the fort has been excavated. A small section of the stone wall and the turf wall have been reconstructed on part of the site. The problems of constructing in turf can clearly be seen. There is an excellent museum. The boggy and acid ground provided excellent conditions for preserving writing tablets.

The Roman Wall
Coming out of Newcastle, you will see small sections of wall just a few stones high that will give you a glimpse of what is to come. Probably the best site is the vallum crossing at Benwell. The two main sights which everyone heads for are Chesters and Housesteads Forts.

Chesters Roman Fort has one of the best preserved bath houses.
The rather old fashioned museum has a good collection of Roman stones. 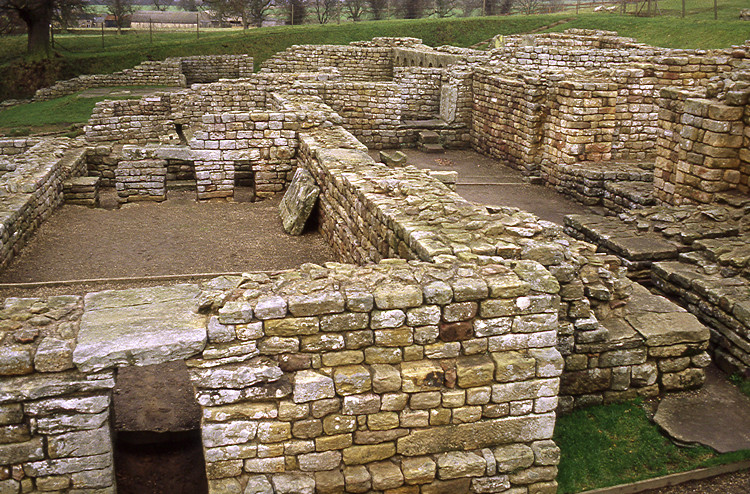 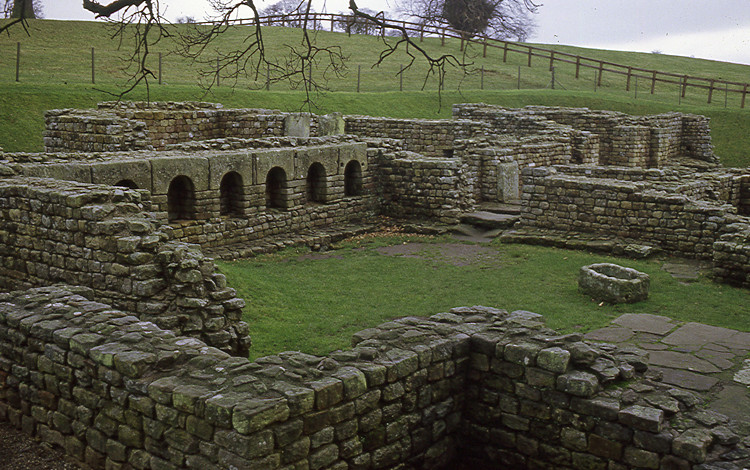 The fort was built close to one of the river crossings over the North Tyne. The remains of the bridge abutment be seen near here. You can reach the southern side by following the B6318 east to the roundabout, crossing the bridge over the river and then taking the signed path along the river to the abutment. Housesteads Roman Fort is the place EVERYONE goes to visit, if only to see the latrines. It is a marvellous setting on the hillside above the South Tyne Valley. Be warned it is a steep 10 minute walk up from the parking lot to the fort. There is excellent walking from the fort along the wall in both directions. Most people go west following the wall through the trees to the remains of a milecastle. You can continue west over Hotbank Crags to Hotbank and views of Crag Lough. There are details of a circular walk here. To lose the crowds, go east. Drop down through the east gate to the Nag Burn and pick up the line of the wall. Follow this to the top of Sewing Shields Crags and Sewing Shields Farm beyond. Sewing Shield Crags is one of the legendary burial places of King Arthur. Make sure you know what to do if he wakes ...

Walking the Wall
OS Landranger map 87 covers this stretch of the wall. Although, if you want to go further west than Haltwhistle, you will need map 86 as well. You will also need sturdy shoes or boots as stiles and gateways can get very muddy after the rain. You are asked not to walk on the wall itself. Be warned there are a lot of ups and downs in places, but the scenery is dramatic. Listen for the bubbling call of the curlew - the bird shown on all signs for the Northumberland National Park. Parking is available at Housesteads, Steel Rigg, Cawfields and Walltown Quarry.

Steel Rigg car park is signed north at the crossroads by Once Brewed Information Centre. In 2 days, you can see the best of the wall by walking out and back in both directions. Steel Rigg east to Sewing Shields and back is achievable in a day with time to visit Housesteads. From the car park, follow the wall and scramble up the crags. Then, there is a pleasant gentle walk along the ridge with views of Crag Lough, Greenlee and Broomlea Lochs to the north. After Crag Lough, you drop down to Hotbank Farm, then climb to the top of Hotbank Crags to Housesteads and Sewing Shield beyond.

Going west from Steel Rigg you climb to the top of Winshields, the highest point on the wall at 345m. There is then a roller coaster walk along the ridge to the road crossing at Shield on the Wall and ending up at the carpark for Cawfields picnic area. For those only wanting a short walk, the 2km between Cawfields and Shield on the Hill is one of the easier stretches of the wall for walking with good views. The remains of the vallum can be seen to the south of the wall and the ditch to the north. The wall is several courses high along this stretch and there is a nice milecastle above Cawfields.

Cawfields car park is signed north from the Milecastle Inn off the B 6318. It is a lovely site next to a flooded quarry. Take note of the signs if you have children. It is deep and the water is cold. I find the stretch to the west beyond Cawfield not as scenically good, although it does take you through the unexcavated remains of Great Chesters Fort. Look out for the remains of the strong room arch.

The final stretch along Walltown Crags is good. This is the highest part of the wall still standing, up to 2m high. To save the steep climb, turn round when the footpath begins to drop down alongside Walltown Quarry.

If you just want to see this stretch of the wall, turn off B6318 and follow signs to Walltown Quarry car park where there is a small visitor centre. Turn right at the crossroads by Carvoran Roman Army Museum and drive about 400m along the unclassified road. There is a small car park off the road. Walk up to the wall.

West of here, the wall was built of turf. You can still see a bank in some places, but after the adrenaline raising section earlier, this area is tame.

Suggestions for Non Roman fans in the area
If you just concentrate on the Romans you will miss lot.

Hexham is a delightful small town still with a lot of small family run shops and a splendid Abbey  with a saxon crypt. Don’t miss the Old Goal with its insight to the Border reivers and crime and punishment in the area.

Allen Banks is a delightful area of woodland along the banks of the River Allen in the care of the National Trust. There is a network of paths along both sides of the river. Combine this with a visit to Allendale Town which is unspoilt and a step back in time.

Haltwhistle and the South Tyne Valley
Haltwhistle markets itself as the ‘Centre of Britain’ but don’t let that put you off as it is one of my favourite small towns in Northumberland. It is a very friendly, welcoming place with an interesting industrial heritage.   There is a lovely walk up Haltwhistle Burn on the route of an old tramway. The station is worth a visit with its splendid footbridge, water tower, and disused railway bridge over the River Tyne. This was the Haltwhistle to Alston branch line and is now a walking trail.

Drive up to Alston. Although this is actually in Cumbria, being at the head of the South Tyne Valley, it feels more Northumberland than Cumbria. It is the highest market town in England and still has its cobbled streets. cobbled streets. Railway buffs may want to visit South Tynedale Railway  running along a rebuilt part of the old Alston Track.

Drive back along the yellow road down the east side of the valley. You will need a map to follow the route. The road is narrow and gated. It gets little through traffic but is a lovely drive through an unspoilt area.

Drive to Featherstone Castle (not open) and walk through the park along the river. The brick remains on the grass are all that is left of a World War Two Prisoner of War camp. Combine this with a walk to Lambley Viaduct on the old railway line.

This is one of a series of Travel notes on Northumberland:
part 1 - Overview,
part 2 - Hadrian's Wall,
part 3 - North Tyne Valley,
part 4 - Castles and Stately Homes.

I spent 6 years in Durham in the 1960 and fell in love with the north east. Since then we have spent many happy holidays in the area and have walked most of the North and South Tyne valleys. The pictures have been scanned from photographs and slides which explains the poorer quality.
Last edited: Dec 20, 2021
Click to expand...