This is an amazing example of C19th ingenuity and engineering and is often affectionately referred to as 'the cathedral of the Canals'. The word 'impressive' hardly begins to describe it. 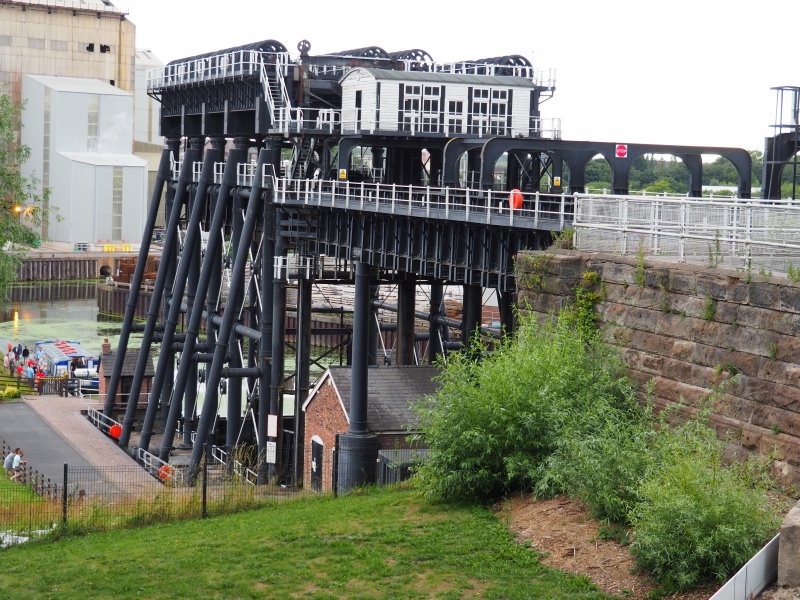 Salt extraction has been a major industry in Cheshire since the C17th and the salt was taken by boat along the River Weaver to the Mersey where it could be shipped out to the rest of the country. It also bought in china clay for the potteries which was off loaded onto pack horses at Northwich and taken the 28 miles to Stoke on Trent. Porcelain and bone china were then carried back to Northwich by packhorse. Not only was this slow, the breakage rate was 25-35%.

The opening of the Trent and Mersey Canal tapped into the lucrative potteries trade. Goods could be moved more quickly and with fewer breakages than by road. The Weaver Navigation Trustees were opposed to the opening of the canal as they were afraid it would take trade from them. This proved the case and they soon lost over half of their trade to the canal.

However, the river could carry more cargo and the larger and more powerful barges could reach Liverpool more quickly and cheaper than by canal. The owners of the River Weaver Navigation and the Trent and Mersey Canal decided to work together and develop Anderton as an exchange point. A large basin was constructed below the canal and warehouses were built for storage goods could be shipped to Liverpool.

The canal is 50’ above the River Weaver. Initially shutes were built to transfer salt from the canal into barges below on the river with inclined planes to carry breakable goods. This proved to be time consuming and expensive.

There was no space to build a series of locks so a boat lift was proposed.

Edward Clark of London was approached and came up with a design for a double boat lift using two water filled caissons supported by hydraulic rams under each caisson to lift and lower the boats. A short aqueduct connected the canal to the top of the boat lift. A small wooden hut, the valve house, was built on top of the gantry for the operator responsible for opening and closing the valves and gates into the caissons. 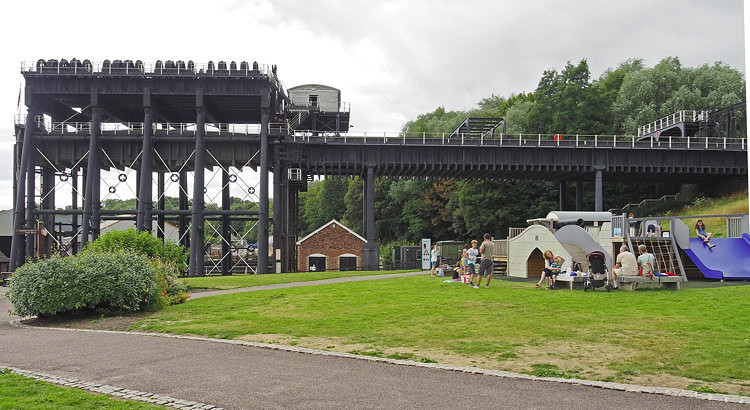 Each of the caissons could hold two narrowboats. A small stationary steam engine was houses in a brick building at the bottom of the boat lift which provided the power to lift the top caisson the few feet needed to access the aqueduct. 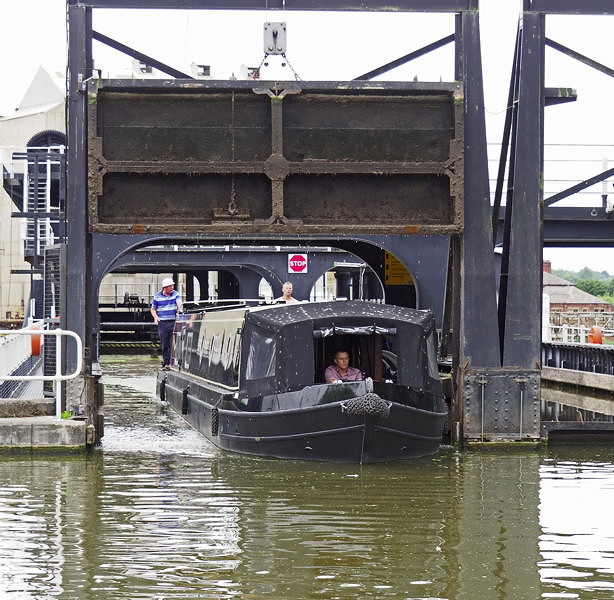 The lift worked from 6am to 10pm and was controlled by 6 people, working in shifts. An operative in the valve house worked the hydraulics. An engineer was responsible for the steam engine. A clerk measured and recorded the weight of goods in each boat to work out the tolls and three labourers were responsible for boats entering or leaving the caissons.

Water from the River Weaver as used but is naturally salty and this lead to corrosion of the rams and the lift as becoming increasingly unreliable leading to disruption in trade and loss of income. In 1908, Colonel John Arthur Saner came up with an ambitious plan to convert the lift to electrical power. Electric motors were placed on top of the lift which raised and lowered the caissons using wire ropes which passed over pulleys and down to counterweights hanging from the sides of the lift. A framework of steel girders was placed over the original structure to support the extra weight.

The weight of the caissons and counterweights was now borne by the lift structure instead of the rams. The caissons could now work independently. There was no longer a need for a stationary steam boiler and maintenance costs were reduced.

Canal traffic fell drastically during the C20th and it was becoming increasingly difficult to justify the cost of repairs. The lift finished working commercially in the 1970s and was just used for private boats. By 1983 was falling to pieces and was shut down. The caissons and winding gear were removed.

In 1997 it was agreed the boat lift should be restored and there was a major fund raising project to raise the £7million needed. The lift would be restored to hydraulic operation using hydraulic oil with wheels and pulleys on the top with counterweights. The lift is now operated by a new control centre in the visitor centre. It is now regularly used by pleasure craft and carries up to 68 boats a day. The site around the boat lift has been landscaped with gardens with plenty of picnic tables and a very good childrens play area. The original counterbalances have been used to build a maze in the grounds. There is also a display of some of the original equipment which could not be reused in the restoration of the boat lift. The visitor centre has information and a video about the boat lift, shop, hands on activities for the children and cafe selling very good cakes. The shop also sells food to feed the ducks and swans on the canal.

Boat trips can be booked through the Visitor Centre. The short trip takes 30 minutes and includes a talk about the history and building of the boat lift as you either ascend or descend in one of the caissons. This is a surprisingly smooth ride and you are not aware of any movement until you look out of the window and see the ironwork moving. The longer trip of 90 minutes includes a trip along the River Weaver as well as the boat lift. The centre recommends advance bookings but these do need to be done by phone as you cannot book on the website.

It is worth planning to spend time watching the videos and reading the information in the Visitor Centre before joining a boat trip.
Click to expand...