Banbury is an attractive market town in the Oxfordshire countryside made famous by the medieval nursery rhyme "Ride a cock-horse to Banbury Cross".


Ride a cock-horse to Banbury Cross,
To see a fine lady upon a white horse;
Rings on her fingers and bells on her toes,
And she shall have music wherever she goes.​
This first appeared in print in the mid C18th and the ‘fine lady’ is thought to be a member of the Fiennes family, who were ancestors of Lord Saye and Sele who own nearby Broughton Castle. The statue of a fine lady on a black horse was commissioned by the council in 2006. 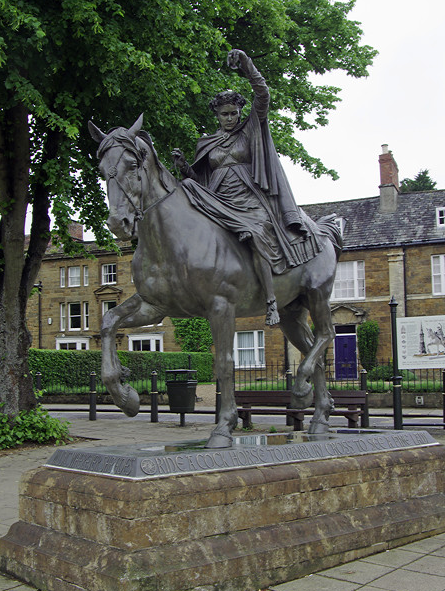 There is still a Banbury Cross at the bottom of Horse Fair, but is Victorian, erected to commemorate the wedding of Queen Victoria’s eldest daughter to the Crown Prince of Prussia in 1859. The statues of Queen Victoria, Edward VIII and George V were added in 1911 to celebrate the coronation of George V. 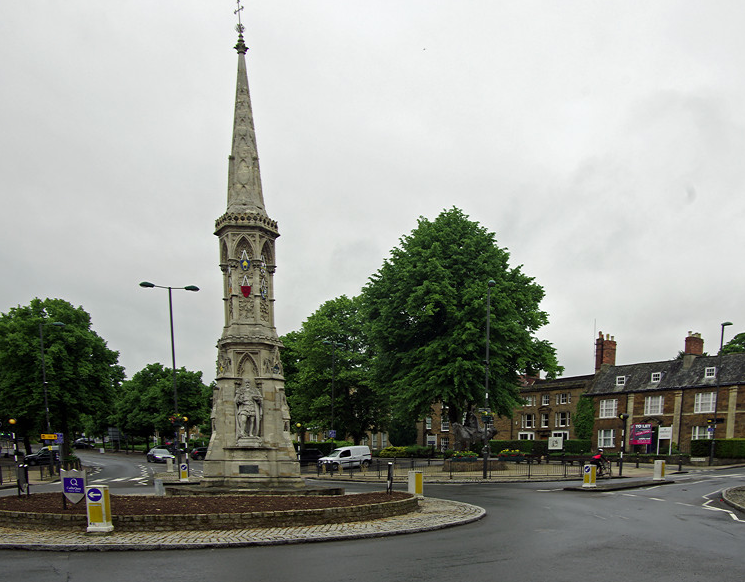 Banbury once had three medieval crosses but they were destroyed in 1601 at the request of the Puritans who disliked the religious imagery and superstitions associated with them. Now they are marked by information plaques near each site. The cross of the nursery rhyme was probably High or Market Cross on Cornhill, which was the focal point for public proclamations. The Bread Cross at the corner of High Street and Butchers Row was a large covered cross covering the stalls of the butchers and bakers who had their market there. Little is known about the White Cross which was at the western boundary of the town.

Banbury was a Saxon settlement at the junction of two ancient trackways. Although it was never a walled town, it did have arched gateways or bars across the main roads leading into the town and their names survive in the street names of South Bar, North Bar and West Bar. The triangular market place reflects the arrival of the Danes in the C10th.

It became an important medieval town with a flourishing market and many coaching inns. The Reindeer Inn dates from the C16th and was used by Oliver Cromwell as his base during the siege of Banbury Castle. There are other C16th buildings scattered around the town. Some of the old alleyways still survive. The Norman castle was demolished after the Civil War, when it was a Royalist stronghold. Its stones were used to repair other buildings damaged during the siege of Banbury.

The Church of St Mary the Virgin had also been damaged during the Civil War an collapsed at the end of the C18th. It was replaced by a stunning Georgian building with a pepper pot tower and central dome supported by twelve pillars. The Catholic Church of St John the Evangelist at the opposite end of the town was built in the early C19th as part of the Catholic revival and is very plain in comparison. The opening of the Oxford Canal in 1790 lead to the growth of Banbury as an industrial as well as a market town as it ensured a cheap and reliable supply of coal. The railway arrived in 1850 and the town grew rapidly. Tooley’s Boatyard built boats until the 1940s and still carries out repairs. It is the oldest dry dock on the Inland Waterways and the workshops have been carefully restored. They offer a range of courses from painting roses on narrow boats to learning blacksmith skills. They also have a purpose built canal boat offering trips on the canal.

Banbury Museum is in a modern, purpose built building at Castle Quay. It tells the history of the town as well as having a rolling programme of special exhibitions. There are displays on the canal heritage, Elizabethan silverware and it has one of the best collections of costumes in Oxfordshire.

The town still has a Thursday and Saturday market and is still famous for its Banbury cakes, flat pastries with a spicy fruit filling and they can still be bought in local bakers.

Tourist Information have produced a leaflet of a Historic Town Trail and the museum has produced an oral history sound trail.

There are a range of events and festivals throughout the year from a food fair, flower and produce show, canal day and even a folk and hobby horse festival.

There’s more to Banbury than the nursery rhyme.
Last edited by a moderator: Feb 17, 2021
Click to expand...