Set in the depths of rural Perthshire these gardens are reached by a dramatic drive along a narrow road lined with mature beech trees forming a canopy above. A stone archway leads into the outer courtyard with a 15thC tower house which is no longer used. 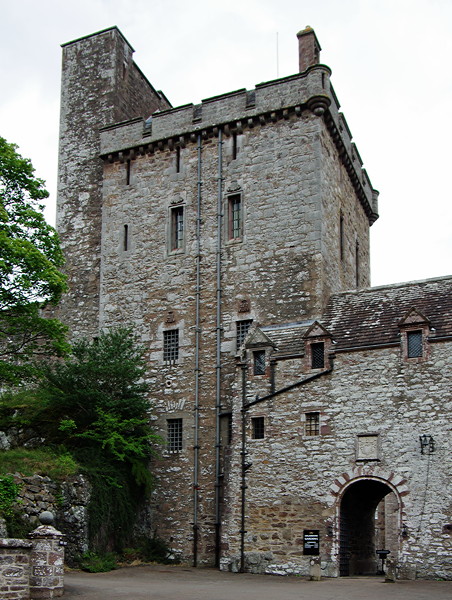 A gatehouse with the small ticket office (there is no tea room unfortunately) is in the gatehouse leading to the inner courtyard with the present castle. This was built in 1689 after Cromwell’s troops had twice attacked the tower house. The 4th Lord Drummond was created Earl of Perth and built a new house to befit his status. Not open to the public, it is a splendid large stone building with turrets and family crests. 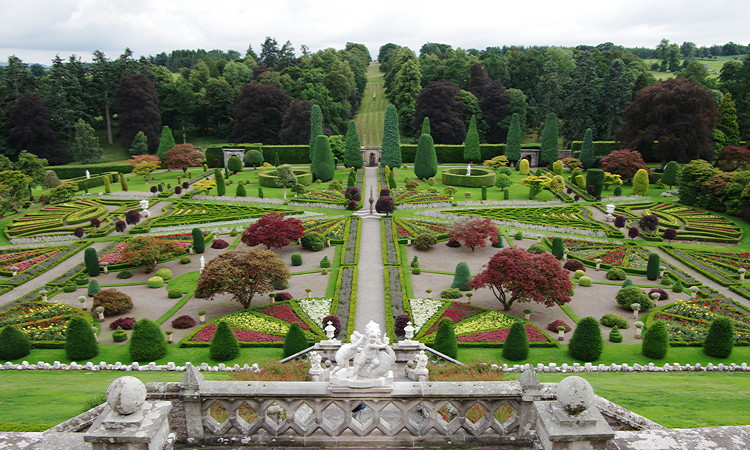 They are an amazing sight with neatly trimmed low box hedges with roses and bedding plants, ornamental Acers, carefully trimmed trees, urns, statues and peacocks. The central design is a St Andrew’s cross with a tall obelisk at the centre. This is in fact a sundial made by John Milne, master mason to Charles I, in 1630. Beyond, the eyes are drawn across the garden to the wooded hillside beyond with a wide swathe of grassland running up the hillside.

Stone steps run down through a series of stone terraces to the garden below. There is a narrow brightly coloured herbaceous border beside the grassy walk along the first terrace. Steps lined with fuchsia bushes lead down to the second terrace with Yucca and huge blocks of white quartz along the top of the wall. 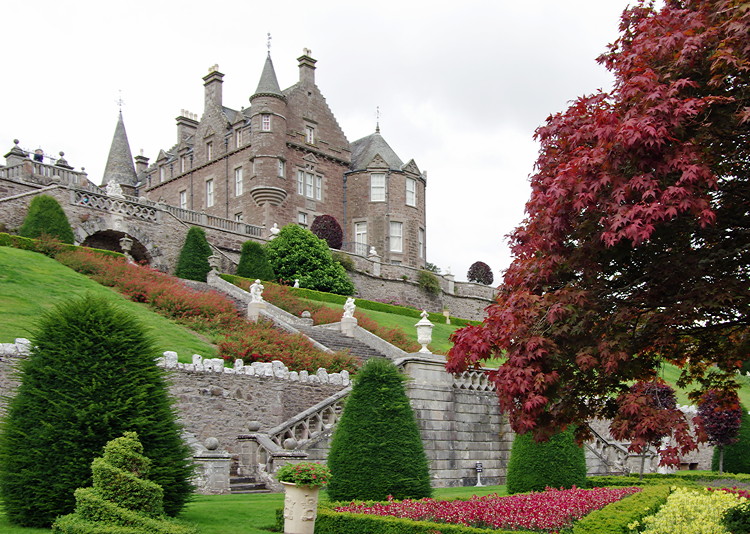 Gravel paths run through the main garden with carefully trimmed box hedges marking out the design of the parterres. Large and small ornamental Acers are planted round the gardens. The central path has lavender bushes between the box hedges. The rest of the design is filled with rose bushes or yellow and red antirrhinums. Cross paths have borders with Stachys byzantina, what as children we always called “bunny rabbits ears”. In the grass areas there is a wide range of coniferous trees, all carefully trimmed. Many are shaped to look like giant mushrooms. At the end of the garden, gates in the walls lead down to the vegetable gardens and greenhouses.

The gardens are described as Scotland’s most important formal gardens and amongst the finest in Scotland. This is no exaggeration. Even after many visits, we never cease to be wowed by the garden.

There is a large car park with toilets outside the gardens.
Click to expand...