I heard today that Doru passed away last week. Doru was one of the early members on SlowTrav and became our SlowTrav Patriarch. He was a wonderful presence on the forums. He also took part on SlowEurope and we moved over his SlowTrav trip reports.

Steve and I first met Doru and Josette in Toronto in August 2005. We were there to visit my family (I am from Toronto). We met again later that year when he organized the Toronto SlowTrav GTG. I can't remember meeting up in Italy, but we did visit with them over the years when we returned to Toronto. Our last visit there must have been in 2012.

We spent a few days in Paris with Doru and Josette on their 2012 trip. They were there for a month, we went for a few days to meet them.

Doru and I kept in touch by email. He had lots of great advice and information for me for our Israel trips. I had not heard from him since last summer, except for a birthday card this January, and didn't want to push too hard when he did not respond to my last few emails.

Thanks to @Doug Phillips for posting the info on Facebook and, since I no longer take part there, for a couple of friends emailing me about this.

Goodbye Doru! I will miss you. Please post any memories or photos of Doru that you have. 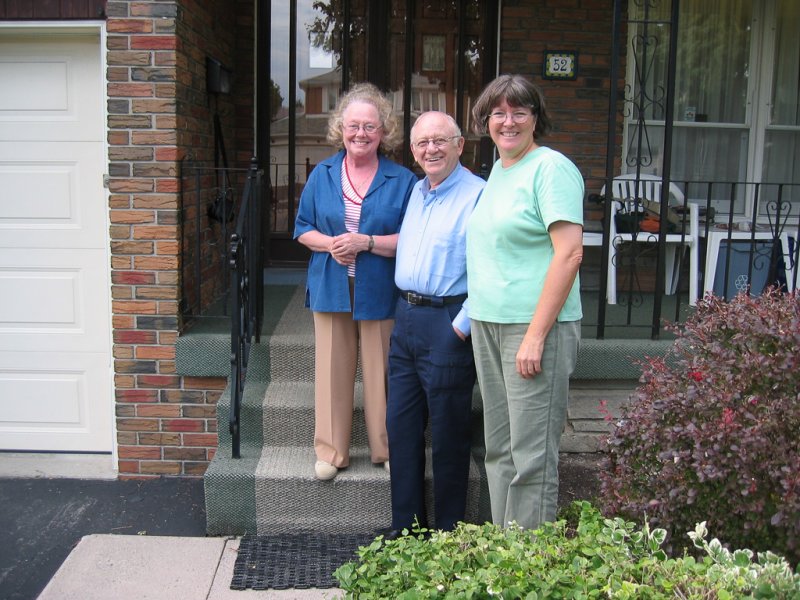 Doru and Steve in Paris, September 2012 Lunch with @Parigi and her husband in Paris, September 2012

This is the obituary from the Globe and Mail.

DORON MIDRONI On Wednesday, May 5, 2021. Doron Midroni, beloved husband of Josette for over 63 years. Loving father and father-in-law of Gyl Midroni and Phuong Nguyen, and Ran Midroni and Karen Halpern. Devoted grandfather of Jacqueline, Julie, Cooper, Logan, and Riley. Doron was born Isidor Marcovici in Bucharest, Romania in 1936. With his quick wit and way with words he was writing for the Bucharest paper by the age of 14, a veteran reporter by the age of 17. He studied journalism at the University of Bucharest, and had his own regular show on Radio Bucharest at age 21. During these years he met then married the love of his life Josette. In 1961 they immigrated to Israel, starting a whole new life, in a new language, with a new name (Doron), building a successful career in Israeli international banking, where he rose to a senior level, while he and Josette were raising their two boys, Gyl and Ran. In 1974 Doron and his family immigrated to Canada, again starting afresh, again with a new language, and once more working from the ground up to become a director at the Bank of Nova Scotia at the time of his retirement at the age of 72. Beloved by his many employees, he was an architect for the SWIFT international financial exchange system that underlies international banking to the present time. After retirement Doron was again renamed, now to 'Opapa', as he and Josette looked after, taught, and loved their 5 grandchildren. Always a gentleman, widely read in the arts and science, able to strike up friendships and conversations with anyone, genuinely interested in the lives of others, and composer of elegant prose, he was respected by friends and loved by all who knew him. His loss will leave a hole in all our lives, but we have the memories, pictures, and documents of a life well-lived to give us comfort. A testimonial or personal message on the web site condolence book would be greatly appreciated. Donations in his memory can be made to the Department of Oncology, St. Michael's Hospital (416)864-5887.

what wonderful memories you have shared with your photos. His tribute is beautifully written. the world has lost one of the good ones.....
J

Sad to hear...
I always enjoyed his posts, even if they had no relevance to me. They were very knowledgeable, kind, and spiced sometimes with a low-key humor. A real gentleman of the world.

Contest 2019 Winner!
These are wonderful photos, Pauline. Doru brought something very special to the old SlowTalk message board, and we started a personal correspondence too. My photo is from September 2006. It's our very first Luberon Experience trip and actually my birthday. I'm in the white top (with very short hair), Josette beside me, and Doru standing behind in the blue shirt. It's not an official Slow Travel GTG, but it sort of turned out that way. We had just three people in that very first group, including STer Joan and her husband Fred in the middle of the left side of the table. (Fred passed away several years ago.) The woman with the short brown hair and her husband (white t-shirt at the end) were also connected with ST, though I don't remember her name. And next to Josette is STer Kevin Widrow and his wife Elizabeth.

Doru and Josette were in Provence at the same time as our first group, maybe staying at Kevin's B&B, as were the other couple. Since our group was small, I invited them to join us for some activities. This was a lunch hosted by the owners of the farmhouse we rented for our long stay in 2004-2005, so it's a special day for many reasons. I loved meeting Doru and Josette in person. He called Kelly "La Petite Bois," the Little Wood and always asked about her.

I can't remember if they were in Savannah and perhaps this is the only time we met in person. It was a wonderful community we had on Slow Travel and amazing how we often built relationships without ever meeting. Rest in peace, Doru. You made a difference to so many! I found a copy of our Patriarch page on old SlowTrav. 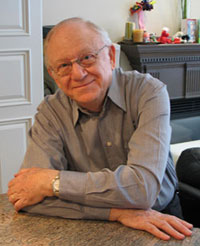 Doru lives in Toronto, Canada and is partially retired from International Banking. He and his wife travel to Europe and the United States frequently.

Doru has written several great trip reports and our page about SWIFT and Money Transfers.

Doru was made Patriarch of the Slow Travel community in 2003. He came up with the idea of having a Patriarch! In September 2006, Doru became a moderator. Now his is both the Patriarch and a moderator!!
Pauline Kenny - forums administrator
Slow Europe - Instagram

I never had the pleasure of meeting Doru in person, but I remember him to be a very knowledgeable and kind person on the Slow Travel Board who was always willing to share his experiences and provide helpful advice to both newbies and seasoned travelers. I enjoy reading and seeing all these lovely fond memories that people are sharing. Doru was a true gentleman who touched many lives. Rest in peace.
Instagram - Walking the Camino de Santiago

Lovely tributes. I so enjoyed knowing him, even if it was virtually, and always respected and took his travel advice. Thank you for posting these pictures.

Contest 2019 Winner!
Oh! This is a sad news to wake up to. I never met Doru in person (even though I live in Toronto), but we did exchange a couple times through messaging. He was a gentleman, always willing to share his knowledge of travel and was a very passionate person, I think. Like may, I really enjoyed his presence and his contribution to this Forum over the years. Rest in peace, Doru!
D

What beautiful tributes to Doru (Doron) and how very sad that he passed away. Since Josette is a classical pianist, we always shared stories and inside knowledge of music and opera. And food, of course. We hung out on a trip to Toronto. He was a wonderful host, so generous and full of love. He will be missed.
Last edited by a moderator: May 9, 2021

Contest 2019 Winner!
That is very sad.
RIP Doru; and thank you for all your wonderful travel wisdom shared with us and others over the years.

Ah, sad news indeed. Doru was indeed a gentleman in the full sense, and a man of broad knowledge about so very many subjects. He was a generous contributor to the community that Pauline and Steve founded, sharing his knowledge freely withouth putting down anyone who knew less than he did.
Doru and I communicated privately after my years on that travel forum ended, mostly exchanging greetings at the time of the Jewish holidays. Of course I now realize that ended two or three years ago... We even got together a few times. I recall meeting him at the Garibaldi statue in Washington Square Park (New York, of course!) followed by a lovely lunch in Greenwich Village.

Doron Midroni, yes, may his memory continue to be a blessing to Josette and the rest of his family, and to us all.

I had an email today from Doru’s wife Josette. She said how much Doru loved the Slow Travel community and how happy he was that we have his trip reports published here.
Pauline Kenny - forums administrator
Slow Europe - Instagram

Although I never met Doru, I loved his posts on Slow Travel. So sad to hear he passed away. Rest in peace.

I still eat at two restaurants he recommended to mee whenever I am in Paris. We emailed a number of times but sadly I never met him in person. Nonetheless, I will miss him tremendously.

I found a few pics of Doru and Josette from two ST GTGs. The first is from NYC. The second two, San Diego. He was beloved. 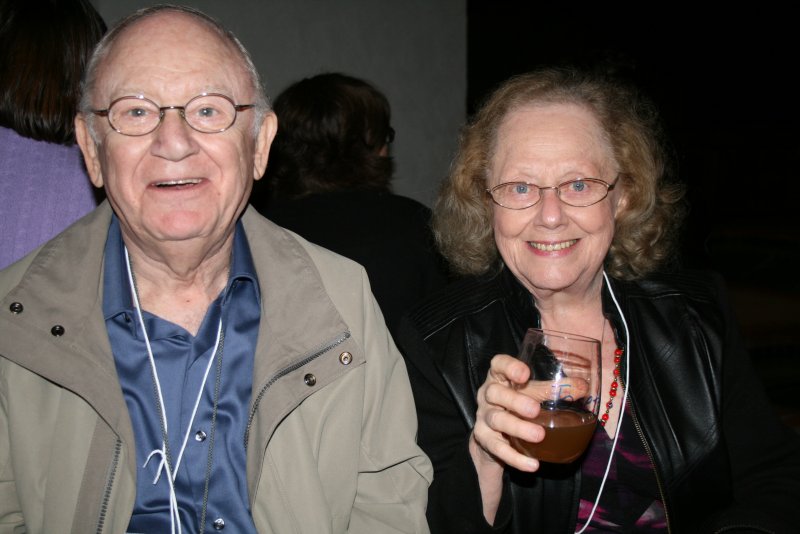