This is an impressive sight both from above and below. It is exhilarating either to cross on foot or by boat. 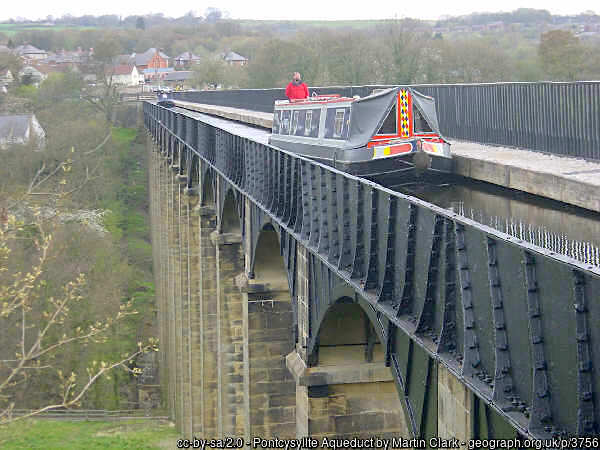 The late C18th was a time of peak building of canals, needed to carry raw materials and finished goods across the country. A canal was proposed to carry cargoes from the mineral rich coalfields of North East Wales. This was an ambitious project across difficult terrain. William Jessop and Thomas Telford were engaged to work on the project.

Their early plans were for a low level aqueduct across the River Dee with locks on either side, but this was abandoned in favour of Telford's grand design: a cast iron trough mounted on stone pillars spanning the valley 126 feet below. The Pontcysyllte Aqueduct was born.

Despite considerable public scepticism, Telford was confident in the success of the plan as he had previously built a cast iron trough aqueduct on the Shrewsbury canal. It was one of the first major feats of civil engineering undertaken by Telford although his work was supervised by Jessop who was the more experienced canal engineer. It established Telford’s reputation as an engineer and designer.

The aqueduct took ten years to build, opening in 1805 and cost £47,000. It was originally built for horse drawn narrow boats and there is a tow path on one side of the canal. On the other side is an unfenced drop.

The aqueduct is a cast iron trough nearly 336 yards in length and five feet deep. It is only wide enough for one boat. The iron trough is mounted on iron arched ribs supported by eighteen hollow masonry piers. There is more information about its construction here.

It linked the village of Froncysyllte to the south with Trevor to the north.

On one side was a tow path used by horses pulling the barges and is now a popular pedestrian walkway. On the other side is an unfenced drop.

Only part of the route was completed because revenue needed to complete it was never generated. Most major work ceased after the completion of the Pontcysyllte Aqueduct. It had been intended to extend the canal to Wrexham where a feeder lake had been built to provide water for the canal.

Trevor Basin became the northern terminus with a feeder channel bringing water from the River Dee at Horseshoe Falls near Llangollen, which maintained water levels and continuous flow of water.

Commercial traffic on the canal greatly declined after a waterway breach near Newtown, Powys in 1936. By 1939, boat movements across the aqueduct to Llangollen had ceased. The canal was formally closed to navigation in 1944.

Although there was no boat traffic on the canal, it survived as it was required as a water feeder for the remainder of the Shropshire Union Canal. The aqueduct also supplied drinking water to a reservoir at Hurleston and the Mid & South East Cheshire Water Board agreed to maintain the canal securing its future

In the latter half of the 20th century, leisure boating traffic began to rise and this is one of the more popular stretches of canals.

A Boat trip across the Pontcysyllte Aqueduct

Narrow boat trips run across the Pontcysyllte Aqueduct either from Llangollen Wharf or from Froncysyllte.

I began a trip on the Thomas Telford at Froncysyllte. The canal is wide here, so the boat can turn round. There is plenty of seating inside, but I chose to stand at the back. On a sunny August afternoon, the tow path was busy. The Aqueduct is only wide enough for one vessel to pass along it. The skipper has to make sure there is nothing approaching before entering the aqueduct. Clearances on either side are less than an inch. 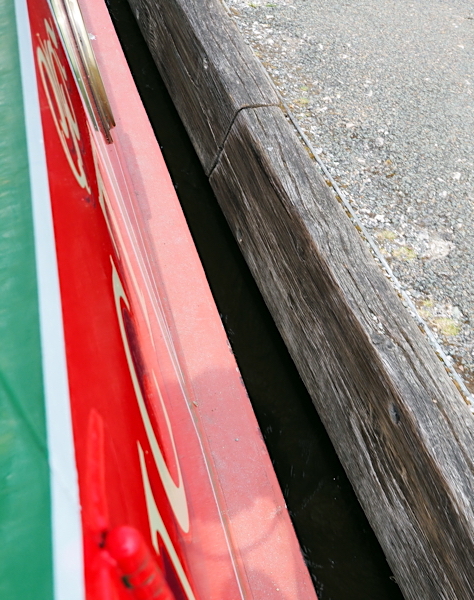 There are views over the side down to the River Dee below. At the far side of the aqueduct, the canal widens to form the Trevor basin. This was built on an artificial terrace and acts as a reservoir and holding are for boats waiting to cross. It was also an important transhipment point for cargo - coal, iron products, building stone, bricks etc which were brought here by horse drawn wagons on a tramway. The buildings were originally warehouses, workshops and repair shops and worker accommodation.

The Trevor Basin Visitor Centre has information about the aqueduct and canal as well as a shop. A Boat trip across the Pontcysyllte Aqueduct cont...

The canal meanders high above the wooded valley and is crossed by small bridges. The tow path is quite wide here and is a popular walk. Most of the way it is wide enough for two boats to pass. Passing is to the left. Speed is limited to 4miles per hour so as to not damage the banks. Most of the canal is lined with stone or concrete blocks, although there are places where the vegetation is taking over. The banks here are most prone to erosion bt boats travelling too fast. After bridge 41 there is a section of very narrow canal where boats cannot pass. There is a holding dock at one end and also a passing place in the middle. Approaching Llangollen, the valley widens and there are views of the Dee Valley through the trees. A swing bridge crosses the canal and this can cause long hold ups if it is shut and needs to be opened. The ruins of Castell Dinas Bran can be seen high on the far skyline. Back in the trees, the canal approaches Llangollen Wharf. Llangollen Wharf is set above the town and was another important transhipment point. The crane can still be seen outside the tea room. It is now the base for horse drawn boat trips with stabling for the two horses, Tobias and Sonic. The trip takes about two hours - a lot depends on how much traffic there is along the canal, particularly across the aqueduct and the narrow stretch. o

On a dry sunny day, it is a lovely leisurely trip with the highlight being the Aqueduct. It is hardly surprising it is a World Heritage Site.
http://wasleys.org.uk/eleanor/index.html
You must log in or register to reply here.
Share:
Email Share Link