Paul Charles on Twitter posts daily with the Coronavirus stats for several countries. Here is today’s list. When we went to Switzerland at the end of August their 7 day average of new cases per 100,000 of population was under 20. So was the UK, Italy and Germany. Europe numbers are much higher than the US. Cases have risen, new lockdowns are happening. What a horrible situation. 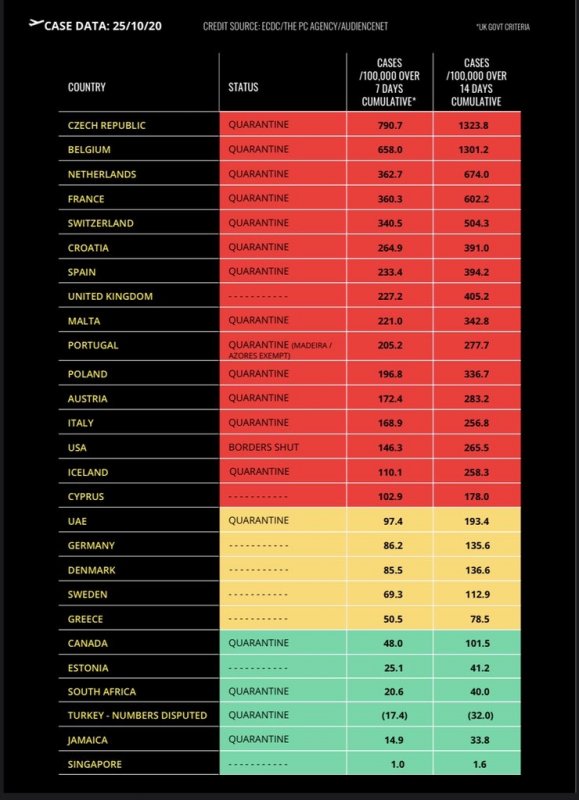 Those numbers for Europe look crazy high, but maybe it's the 7 day and 14 day cumulative that makes it look so high.

We have a mask requirement when entering a store, but I still see 10 to 20% of the people wearing a mask not covering their nose. They put the swab up your nose to test, so not covering your nose makes the mask useless.
Augie | 2013/14/15/16/17/18 Spring/Fall Vacation Blog | France Flickr
J

We (in Israel) have just exited a second lockdown. Tempers are high, with no feelings of assurance that lessons have been learned and that additional lockdowns are out of the question.
The world is playing a "waiting game" for the vaccine, but there should be a more robust adaptation to this situation, especially with the fact that environmental news is also not encouraging at all.

Contest 2019 Winner!
I am finding it difficult to comprehend the numbers coming out of Europe. It just seems as though it will never end.

We feel slightly insulated here in Australia at the bottom of the world. We have had less than 30,000 cases and less than 1000 deaths. The worst affected state here, Victoria, has just come out of several months of hard lockdown. They have worked very hard and daily numbers were down to two yesterday and zero the day before. The state we live in had hard lockdown in the early stages until June when they were slowly eased, and we have had our borders closed. They are just starting to talk about relaxing the state border. We have not had any community transmission here in Queensland for at least six weeks. The only cases are returned travellers in hotel quarantine.

At the moment we can do pretty much anything within reason, and businesses have covid safe plans. There have been some rumblings of discontent around the country of course, and concerns about what it is doing to the economy, small business, tourism. But that is happening all over the world, so we are not alone there. For the most part Australians have accepted the restrictions with good grace and done what has been asked of them.

We are now coming into summer, so it will be interesting to see how it goes once everyone wants to go to the beach.

Take care everyone and stay safe.
The use of traveling is to regulate imagination by reality, and instead of thinking how things may be, to see them as they are. Samuel Johnson.

What has been the situation with wearing masks in Australia? Do most people wear a mask when out in public?

When looking at the numbers on the Johns Hopkins site, Australia and New Zealand have done much better than any sizeable country.
Paul

Contest 2019 Winner!
In Victoria which was the worst state, masks when outside are mandatory in the capital ,Melbourne. Fines are issued if you are caught. I am only really aware of my state and it has never been mandatory. When we were at our peak earlier this year some people wore masks, but I rarely see anyone with a mask here. We do not live in the capital, but in a provincial city where we have had very few cases. Most of those were early in the year and were returning off cruise ships. It is sometimes recommended masks be worn on public transport in capital cities. We have masks but have never used them. I am quite happy to do so if the need arises in the future.

Because we are an island, it has been easier to restrict entry and travellers have to quarantine in a hotel for fourteen days. So we have had that advantage. There indications our international borders which have been closed since March or April will not open until 2021. If we had followed the same trajectory as France, for example, we would have had about 14,000 deaths. We have had 907.

But the fact remains that it is out there and it will not take much for it to get out of control. It continues to be important to not become complacent and think it is gone.
The use of traveling is to regulate imagination by reality, and instead of thinking how things may be, to see them as they are. Samuel Johnson.

Most of the infections are to young people. They traveled, they partied and if they lived with older people, they spread it.

People point to colder weather and there were a lot of predictions of second waves in the fall and winter.

But it may not be a coincidence that when college students returned to campus, the spread started.

In the US at least, case numbers spiked up even before classes started because kids returned to campuses and started going to parties, bars, etc.

Lacrosse, WI, a college town, saw infections rise first among the college students there but unfortunately, it's spread to older people, including the most vulnerable.

wco81 said:
Most of the infections are to young people. They traveled, they partied and if they lived with older people, they spread it.
Click to expand...

This is exactly what we are seeing in Italy, especially here in the south. Europe opened the borders and everyone moved around like there was no pandemic. In September, here in Basilicata, all the positive cases where young people returning from Sardegna, Croatia and Greece. Now that has blossomed out of control to older generations. We have 5x as many cases now as we did during the lock-down

We haven't yet hit the case load they have in France but hospitals are starting to fill-up again all across Italy. It will get worse before it gets better
My Bella Basilicata genealogy

aap519 said:
We have a mask requirement when entering a store, but I still see 10 to 20% of the people wearing a mask not covering their nose.
Click to expand...

I always look at crowd photos and count the people wearing masks wrong. There are always many with exposed noses. Sure it makes breathing easier, but come on!

Cases are rising where we live in Dorset. We have had low numbers the whole time, until now. I am seeing more people wearing masks when walking around town. We’ve started wearing masks when we walk through town. It is only 6 blocks but there are usually a lot of people.

We have to wear masks in shops. I hardly go into shops now (I’ve worked out home delivery for nearly everything now) so I don’t know if people always wear them.
Pauline Kenny - forums administrator
Slow Europe - Instagram

No easy solutions, but I find myself much more respectful of the NZ, Australia, S.Korea, Singapore approaches.

There are some people arguing strongly for simply opening up and letting the virus take its course, or for putting elderly / higher risk into lockdown and telling the young to catch it. However I've yet to see anything resembling a plan from people arguing for that course of action. One that might say how that is done in practice and the likely cost in death and long-term disability. Happy to explore such discussions though, honestly and collaboratively.

As for us in UK and much of Europe, the opportunity to follow a 'reduce to zero' approach was passed up initially in being too slow to react / react fully, then again in the rush to encourage drinking in pubs, dining in restaurants and holidaying in other countries. Then with the schools and universities re-opening, we got an unsurprising thrust upwards, well above the R0=1 that we'd been teetering around. Entirely predictable, even back when lockdown ended and we saw the rush to open up.

I felt at the time of the opening up from 1st lockdown, that a 2nd lockdown would be seen as catastrophic for governments - an admission of failure. Whilst I'm slightly less convinced of that backlash now, the policy of neither letting it happen, nor driving cases down to zero, leaves them with opponents on both sides and very few supporters in the middle. For me such a middle ground was always going to trade a short term economic respite, for longer term economic pain (and a lot more deaths than a genuine attempt to get cases down to the levels trace and trace can cope with). I imagine some big names (and lots of small companies) will fold before the end of the year

I hope everyone is safe and able to manage the risk to yourselves and your loved ones.
Trenta tré Trentini entrarono dentro Trento, tutti e trenta tré trotterellando.
You must log in or register to reply here.
Share:
Email Share Link