Forget the Dracula connection (Bram Stoker used the churchyard as the setting for his novel) this is a lovely church that is older than the abbey ruins next to it. Standing high above the town on the East Cliff, it is a well loved local landmark. Most people reach it by climbing the 199 steps, the route taken by coffins for burial in the old graveyard. 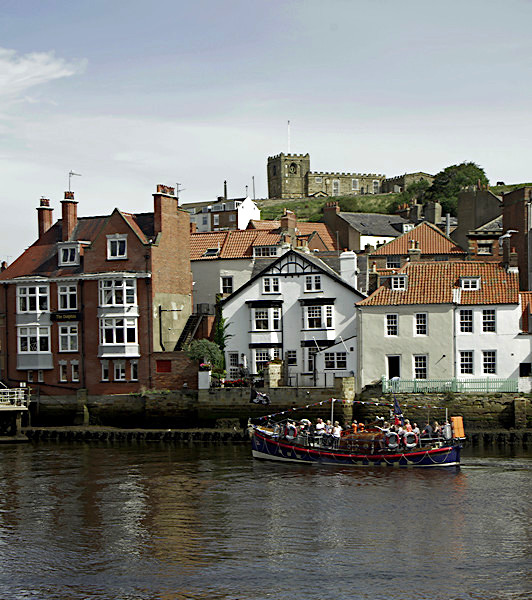 Whitby was a major Christian centre from the C7th and the famous Synod of Whitby held here in 664 AD confirmed the Roman form of Christianity rather than that of the Celtic Monks. It is possible that the original Minster church was on or near this site. In the C9th the area was destroyed during Danish raids. St Mary’s Church dates from 1100 and was built by the monks of Whitby Abbey. It is older than the ruins of Whitby Abbey which tower over it.

The nave, chancel and tower date from this first church and still have the round topped doors and windows. The north and south transepts were added in the C13th and C14th. The battlements round the top of the tower and church are C16th. There were concerns about the stability of the tower in the C17th so the top stage was removed, giving the tower its rather squat appearance. The old high pitched roof of the nave gave way and was replaced by the present flat roof. The line of the old roof can still be seen on the east side of the tower.

There was a major extension at the start of the C19th when the north aisle was extended and the galleries built. These were reached by external stairways. Large square windows were inserted in the walls, making the church much lighter. Dormer windows in the roof give extra light. The box pews were added as well as the three decker pulpit. The inside of the church retains its Georgian interior with box pews tucked into every available space and a gallery around all the walls. It can seat up to 3000 worshippers. 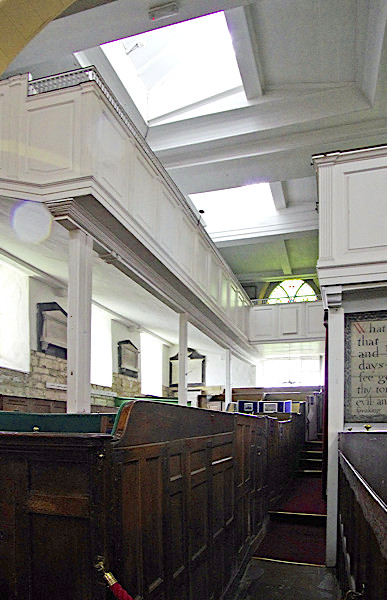 The pews were sold by public auction and the money helped pay for the alterations. Those around the pulpit were larger and had green baize coverings. Further away, pews were smaller with plain wood seats. A few free pews were kept for the poor. Strangers to the church had their own pews. At the back of the nave was a pew allocated to the church maid. Some of the pews in the north extension were used by local communities who did not have their own church and are marked by the village name. Their church wardens retained any money taken from these pews during the collection. One of the duties of the Church Maid was to uncover and cover the privately owned pews for the Sunday service, preventing smuts from cottages below the church, or from the cast iron stove used for heating the church, settling on the pews and marking the clothes of the occupants. In front of the chancel arch and supported on barley sugar columns is the Cholmley pew. The Cholmleys had bought the abbey lands after the Dissolution of the Monasteries and turned the abbey house into their family home. As befitting their social status, they erected a family pew in the most dominant position in the church, and blocking views of the altar. This was reached by their own private external stair. The three decker pulpit dominates the church. The parish clerk sat on the bottom desk. The priest used the middle deck and the top deck was reserved for the sermon. From here the priest could see the whole congregation. On the back of the pulpit are a pair of hearing trumpets used by the wife of the rector who was deaf. Near the pulpit is the cast iron stove which is still the only form of heating in the church. The small font near the pulpit is of unknown date and is the one still used. The church does not use electricity and is still lit by candles and the brass chandelier. Originally displayed in the chancel, but now propped up against the north wall of the church are the painted wooden boards with the Ten Commandment and the Lord’s Prayer. These had to be displayed in Churches after the Reformation. The Royal Coat of Arms also had to be displayed, reminding the congregation that the Monarch was head of the church. This still hangs above the chancel arch and there is another above the west door into the church. In front of it is the vamp horn, a C17th form of megaphone, used by the person conducting the choir or church orchestra. Round the walls are wooden tablets which are over 250 years old and have Scripture texts painted on them. At the back of the north extension is the memorial to the dead of both world wars. Near it is the C15th parish chest used to store the church plate and other valuables. This had three locks. The rector held one key and the churchwardens the other two. The church retains its round Norman chancel arch, although this is almost completely blocked by the Cholmley Family pew erected in the early C15th. On either side of the chancel arch are C15th carved stone fonts which were found being used as field troughs in a nearby farm. The chancel is the least touched part of the church and is Norman with round topped windows. The altar is Elizabethan. The stained glass windows are by Kempe.

On the walls are the memorials to members of the Cholmley family. This is a delightful church and very popular with visitors. The church is open daily and has a small shop. There is a large car park near the abbey, or else the church is reached by walking up the 199 steps. The post code is YO22 4DR and the grid reference is NZ 902113.
http://wasleys.org.uk/eleanor/index.html
You must log in or register to reply here.
Share:
Email Share Link