Cornwall has a large number of prehistoric sites - ancient villages, stone circles, dolmen (called quoits), fogou. I have listed the best of them below for two parts of Cornwall - Penwith and Bodmin's Moor. A Google Map at the end of the article shows the locations.

Penwith, the western tip of Cornwall

Penwith is the area west of St Ives with Land's End at it's most western point and the city of Penzance on its south coast. There are several good prehistoric sites in this area. There are two prehistoric villages (Carn Euny and Chysauster), a few stone circles and a good dolmen. I have listed the sites below in the best order to see them (by location).

Chysauster Ancient Village is an Iron Age settlement, occupied almost 2,000 years ago, and is one of the best examples of such in the country. The village was made up of eight houses in two rows of four each, forming a village street. These were courtyard houses - a stone house with rooms that opened onto an open courtyard in the center. There is a Fogou (underground chamber) but you cannot go inside as you can at Carn Euny. This was a farming community.

The village was built during the Roman Empire, between the 1st and 3rd centuries AD. It was occupied for a short time. These courtyard style houses are unique to this part of Cornwall and the Isles of Scilly.

Location: England - Cornwall - Newmill
There is a short walk from the entrance to the site. There is a small shop at the entrance.
Website: English Heritage - Chysauster Ancient Village 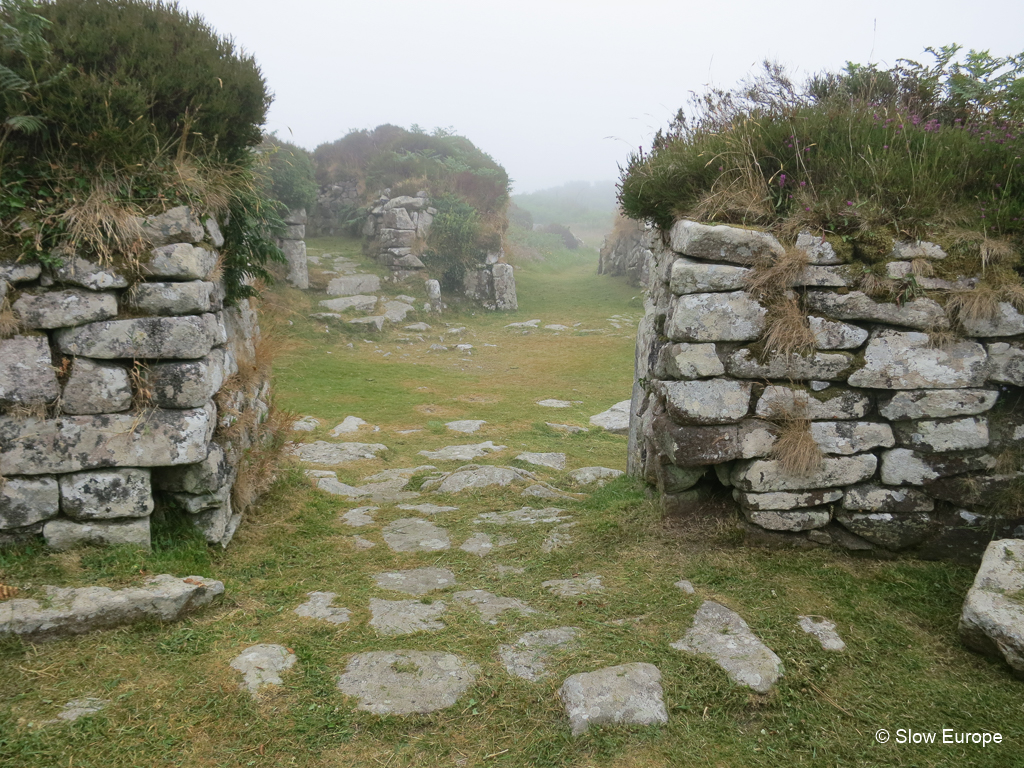 Mên-an-Tol is a group of standing stones. The name in the Cornish Language means "the hole stone". There are two upright stones on either side of a round stone with a hole in the middle. It is thought to have been set up in the Bronze Age, making it 3,500 years old, and might have been part of a stone circle or the entrance to a tomb. At one time children were passed through the hole in the stone as a cure for rickets. People still crawl through the hole for healing or good luck.

​
Location: England - Cornwall - Madron
The Mên-an-Tol is on an area of moorland near the Madron–Morvah road, three miles northwest of Madron. Park at the side of the road and follow the marked footpath into the fields.
Website: Historic Cornwall
Recommended Walk: Park on Madron–Morvah road and walk in to see the Men-an-Tol standing stones. Continue walking to the Boskednan Stone Circle. From there walk to the Ding Dong engine house, then back to the road stopping at the Lanyon Quoit. You can get a very good cream tea at the Lanyon Farm Tea Room, north of the Lanyon Quoit. Mên-an-Tol, people crawl through the hole for healing or luck.

The Boskednan Stone Circle (also called the Nine Maidens) has some fallen stones but nine or ten are still standing. The original circle may have contained up to 22 stones. It can be reached on foot from the Men-an-Tol standing stones.

​
Location: England - Cornwall - Boskednan
The Boskednan Stone Circle is situated on moorland north of the road from Madron to Morvah, 1 km northwest of Boskednan. Walk to it from the Men-an-Tol standing stones.
Website: Historic Cornwall Lanyon Quoit is a dolmen near the Men-an-Tol standing stones. It has three upright stones supporting a large capstone. It collapsed in 1815 and was re-erected in 1824. When we visited a herd of cows was using the stones for shelter.

Location: England - Cornwall - Madron
Park along the Madron–Morvah road. Lanyon Quoit is visible from the road.
You can get a very good cream tea at the Lanyon Farm Tea Room, north of the Lanyon Quoit. 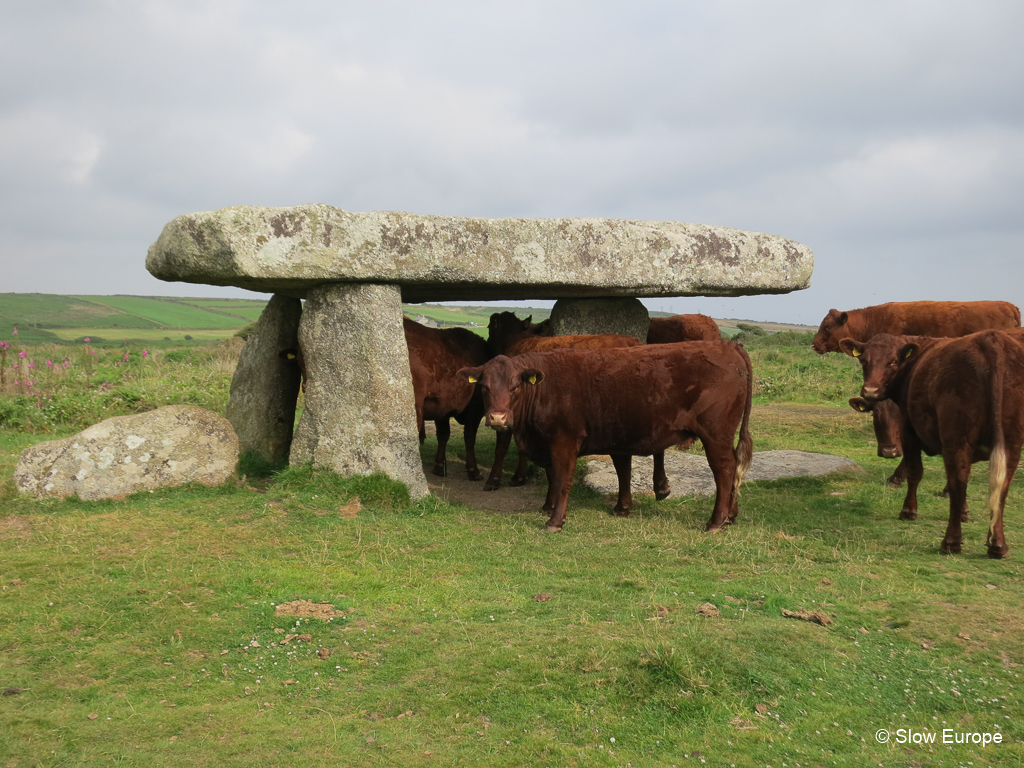 Carn Euny Ancient Village is an Iron Age settlement from the 5th century BC. This was a farming community and was in use for nearly 900 years. There is a well preserved Iron Age Fogou (underground chamber). When the Romans came into this area they expanded the settlement and built courtyard houses - thick stone walled houses surrounding a courtyard. Carn Euny was abandoned in the 4th century AD when the Roman occupation of Britain was ending. Carn Euny is similar to the nearby Chysauster Ancient Village.

The visible ruins are from the last phases of the village when the Romans lived here, but under these ruins are the remains of the Iron Age village. Their houses were built with turf walls and thatch roofs. The Romans built courtyard houses, with thick outer walls surrounding an open courtyard.

Location: England - Cornwall - Sancreed
Follow the signs down the lanes to a parking area. From there it is a 1/2 mile walk (signed) to the site.
Website: Historic Cornwall - Carn Euny Ancient Village Boscawen-ûn is a circle of 19 standing stones, with an extra stone in the middle. All the stones are granite, except for one of quartz. You can see the Merry Maidens Stone Circle from Boscawen-ûn.

Location: England - Cornwall - St Buryan
Park at a lay-by on south side of the A30 at a signed gate. 10 minute walk to the stone circle. The Merry Maidens Stone Circle has 19 standing stones and is thought to be complete (no stones have been removed). It is also called Dawn's Men from the Cornish "Dans Maen", meaning Stone Dance. The name comes from a tale that the stones are 19 maidens turned to stone for dancing on a Sunday. Two nearby stones, "The Pipers", played at the dance.

Location: England - Cornwall - St Buryan
The Merry Maidens Stone Circle is on the B3315, west of Penzance, past the Lamorna road, on the south side. There is a bus stop and a parking area. Don't forget to look for The Pipers across the road in a field (we forgot). The Tregiffiam burial chamber is nearby.
Website: Historic Cornwall Bodmin Moor
Bodmin Moor is in central-eastern Cornwall, close to the Devon border. The sites I have listed below are all near each other.

The Hurlers Stone Circles, three stone circles on Bodmin Moor near the village of Minions. The first circle has only a few stones, but the other two circles have several stones. West of the circles are two standing stones called "The Pipers". There are more prehistoric sites nearby - a tumulus and a hill fort.

​
Location: England - Cornwall - Minions
There is a signed parking lot on the south end of Minions. From here walk out onto the moor. The Hurlers stone circles are not far. There are two tea rooms and a pub in the village. King Doniert's Stone are two pieces of a 9th century celtic cross in a field on the edge of Bodmin Moor. The stones are carved with a knotwork pattern and an inscription for King Doniert who drowned in the River Fowey in the 9th century. The inscription reads "Doniert rogavit pro anima" which translates as "Doniert asks prayers for his soul".

Location: England - Cornwall - St Cleer
On the road to Minions (and the Hurlers Stone Circles), west of the lane to the village of St Cleer. Parking along the road beside the entrance.
Also in this area are St Cleer Well and St Cleer Church, with a Norman doorway and font, in the village of St Cleer and the Longstone or Long Tom Cross, a standing stone with carvings, on the road to Minions.
Website: English Heritage - King Doniert's Stone Trethevy Quoit is an impressive Neolithic dolmen (4th century BC). Six upright stones support a massive 20 ton capstone. According to legend, giants hurled these stones together in a game of quoits. The quoit is in a small village on the edge of Bodmin Moor. There is a round hole in the capstone which may have been added later. It has been used to hold a flagpole. The rectangular hole on the east side may have been used as an entrance.

Location: England - Cornwall - Darite
On the road north of Tremar, towards Darite. Signed from the road to Minions and from Darite village. It is not far from the Hurlers Stone Circle. Trethevy Quoit, Pauline showing the scale of this dolmen. 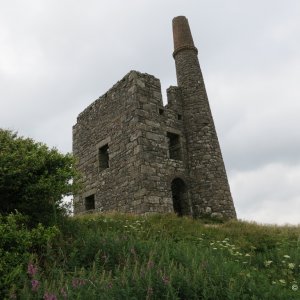 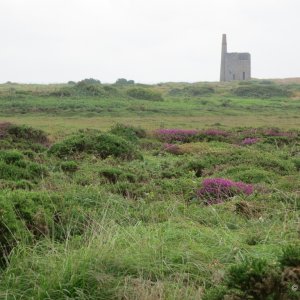 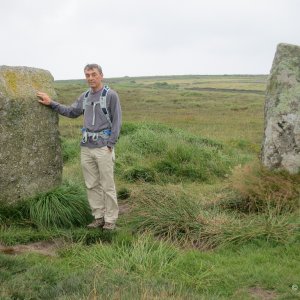 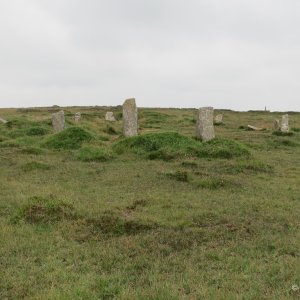 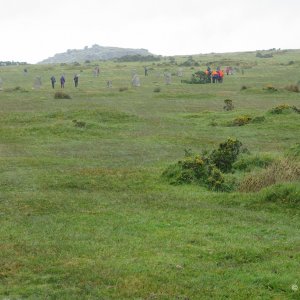 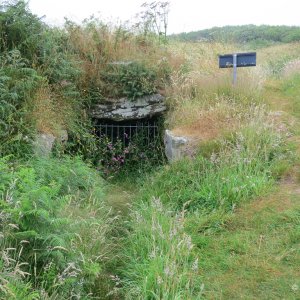 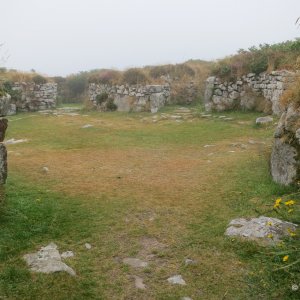 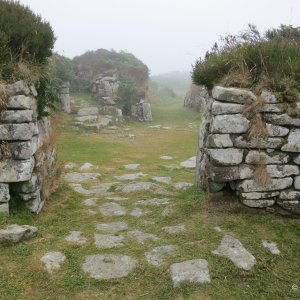 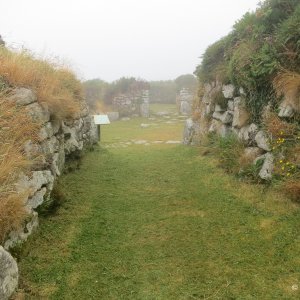 Ancient villages, stone circles, dolmen.
Terms
Dolmen: A single-chamber megalithic tomb (also called portal tomb, portal grave or quoit), usually consisting of three or more upright stones supporting a large flat capstone. Most date from 4000 to 3000 BC (Neolithic). They were usually covered with earth to form a barrow. In many cases that covering has weathered away, leaving the exposed dolmen stones.

Fogou: A term used in Cornwall, England. Fogou is Cornish for cave. Fogous were created by making an underground cave and lining the walls and roof with slabs of stone. In other parts of Britain, Ireland and Brittany these structures are called "souterrains". They are found in later prehistoric settlements and their use is not known. Perhaps they were used for storage or maybe there had some religious significance. The fogou at Carn Euny Ancient Village is a good example and you can walk into it.
Click to expand...